CLEVELAND — The National Transportation Safety Board has released its preliminary report on the plane that crashed into Lake Erie last month, killing all six people on board.

The findings provide a timeline for the Dec. 29 crash, but do not indicate why the Cessna Citation 525 suddenly lost altitude and crashed just one minute after takeoff.

The report reads in part:

“An initial review of Air Traffic Control (ATC) transmissions between the pilot and the Midwest ATC Federal Contract Tower at BKL revealed that the pilot requested the IFR clearance at 2247, followed by the taxi clearance at 2251. At 2256, the pilot informed the BKL tower controller that he was holding short of the runway and ready for takeoff. The controller subsequently cleared the pilot for takeoff and instructed him to turn right to a heading of 330 degrees and maintain 2,000 feet msl after departure. The pilot acknowledged the clearance. After takeoff, the controller instructed the pilot to contact departure control; however, no further communications were received from the pilot. After multiple attempts to contact the pilot were unsuccessful, the controller initiated search and rescue procedures.” 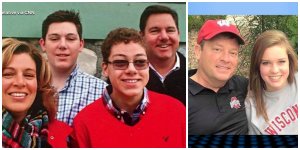 Fleming, his wife, their two sons and their neighbors were all killed.

Airplane debris including the cockpit voice recorder was later recovered. The NTSB says a committee in Washington will listen to the recorder and transcribe it for the investigation into the cause of the crash.

“The resulting search and recovery effort was hampered by weather and lake conditions. Airplane debris, including the cockpit voice recorder, was ultimately located about 0.10 mile northeast of the final data point. The cockpit voice recorder was transferred to the NTSB Recorders Laboratory for readout. A detailed wreckage examination will be conducted once recovery operations have concluded.”

Timothy Ray Brown, who made history as “the Berlin patient,” the first person known to be cured of HIV infection, has died. He was 54.

Brown died Tuesday at his home in Palm Springs, California, according to a social media post by his partner, Tim Hoeffgen. The cause was a return of the cancer that originally prompted the unusual bone marrow and stem cell transplants Brown received in 2007 and 2008, which for years seemed to have eliminated both his leukemia and HIV, the virus that causes AIDS.

SHAKER HEIGHTS, Ohio (WJW)-- The Shaker Heights Police Department is investigating after one of its police officers reportedly made an obscene gesture towards protesters.

The incident happened as a group of demonstrators marched from Wade Oval and down Martin Luther King Jr. Drive in Cleveland Tuesday night ahead of the presidential debate. You can see some of that march in the video, above.

Members of the Akron Anti-Violence Bureau, the Akron SWAT Team and the ATF served a search warrant at a home on Tioga Avenue.

Titans vs. Steelers game postponed due to positive COVID-19 tests

‘These five relish it’: Gray parrots separated at zoo after swearing a blue streak

Target squares off with Amazon, sets Oct. 13, 14 for beginning of holiday shopping season

‘I will always tell you the truth’: Joe and Jill Biden train tour launches from Cleveland