NEWBURGH HEIGHTS, Ohio– The Newburgh Heights Police Department is thanking the residents who assisted an officer injured in a rollover crash Sunday morning. 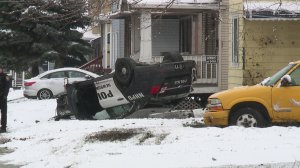 Police said Veverka, a 12-year veteran of the force, was trying to catch a traffic offender when he hit a patch of ice.  His cruiser went off the road, hit a parked car and rolled several times. It finally came to a rest in the yard of a house in Independence Road in Cleveland.

Several people heard or saw the crash, and helped remove the officer from his cruiser, according to police.

There were no other injuries.

;v=f0kA_WOC6OY&feature=emb_logo EL PASO, Texas (CNN) - A Texas community hit by terrible tragedy months ago came together over the weekend to celebrate a survivor's first birthday. Paul Gilbert Anchondo was two months old when his parents died shielding him from a shooter at an El Paso, Texas, Walmart on August 3, 2019. Over the weekend, the toddler turned 1, CNN affiliate KVIA reported, and hundreds of residents drove in a parade to celebrate the…

(WJW) – More of Ohio’s economy will begin reopening this week. Here’s what to expect as things start to get back to business. POOLS While many cities and municipalities opted not to open pools this summer, those who want to open are allowed starting this week. Many employees will be wearing masks and may ask you to do so in public spaces. Facilities are expected to create barriers for social…