CLEVELAND – This week, some Cleveland Police officers took away a basketball hoop used by kids in the street and ticketed a mother. But that left some other officers so outraged, they got 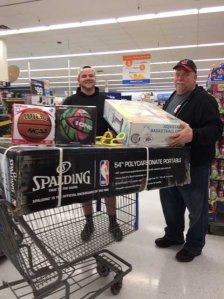 together to replace the hoop.

It happened on the city’s west side.

Cleveland has an ordinance against playing in the street. A report shows police went to the home after receiving a complaint. They seized the hoop, hauled it away, and issued a ticket.

But, Tuesday, officers gathered donations, bought a new hoop, delivered it to the home on Behrwald, and they set it up in the family’s driveway.

It doesn’t wipe out the ticket, but cell phone video from the surprise delivery shows broad smiles on the faces of the kids.

We’ll watch to see what happens in court.

**Watch the video above for more information on coronavirus antibody testing**

ELYRIA, Ohio (WJW) — Vitalant is now testing all blood donations for the antibodies that reportedly cause COVID-19.