CLEVELAND — The Toy Soldier at Tower City has been bringing Christmas joy to families for 25 years.

The holiday show is a tradition that’s being passed down from one generation to the next.

Alysha Stoyka of Parma has been going to see The Toy Soldier and Fairy Godmother Holiday Show since she was a child.

“My favorite part of the show would have to be when The Toy Soldier picks the kids out of the crowd,” she says. “It brings back so many memories and makes me feel like a kid again.”

Stoyka and her husband brought their 6-month-old son Paul to see the show this year.

They hoped The Toy Soldier would select their baby boy from the crowd to be part of the show, and — sure enough — he did! 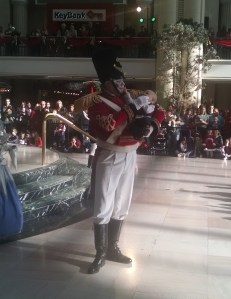 “I had mixed emotions when he was picked up,” Stoyka explains. “Happy, excited, relieved…because I really wanted the toy soldier to pick him!”

After The Toy Soldier danced with her little boy, he chose a young woman to dance with.

Dancing with an adult is not something he normally does, but the crowd thought it was sweet..and it only got sweeter.

It turned out to be part of a surprise wedding proposal. (Click here for more about the surprise proposal, including video and interviews)

The Toy Soldier and Fairy Godmother Holiday Show is free and takes place on Saturdays and Sundays through December 21 at 1 and 3 p.m. on The Grand Staircase at Tower City in downtown Cleveland.

Everybody gets a chance to take a photo with The Toy Soldier and Fairy Godmother after the show during a meet-and-greet session.

CLEVELAND (WJW) -- Governor Mike DeWine now says he will send the National Guard to Cleveland next week to help with security for the first presidential debate, and the I- TEAM has uncovered what else you can expect in the streets.

DeWine says City Hall made a formal request for the National Guard and he granted it to help with “back-up," which he calls “important."

HARVEY, La. (WGNO) – A Louisiana fourth grader was suspended for handling a BB gun during a virtual classroom session, but a lawyer representing the student's family says the punishment was too harsh.

Nine-year-old Ka Mauri Harrison was in his bedroom taking a Social Studies test virtually on the afternoon of September 11 when the incident occurred, according to attorney Chelsea Brener Cusimano, who represents the Harrison family.

HOLLYWOOD, Cali. (WJW) --"This Is Us" star Mandy Moore is celebrating some exciting news with her husband, Taylor Goldsmith, who is the lead singer of Dawes.

The actress announced on Instagram they are expecting their first baby.