NORTH CANTON, Ohio– It was an unexpected gift.

“We live on Hilton Head and we’d thought you’d like to know we found Delaney Riley’s message in a bottle. “We’re two best friends– nine and ten years old– and we think girls rule too.” 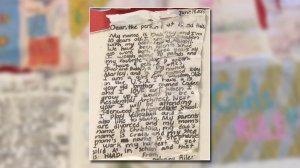 On June 18, Delaney Riley and her best friend, Abigail, filled up a pop bottle with a note and pictures and threw it in the ocean while the two were in Hilton Head over the summer.

In their imaginations, the bottle with their hand-drawn pictures, would travel to some far-away exotic place.

Instead two other girls near the same age found it on the beach in Hilton Head over the weekend.

And among the letters and pictures they found a cell phone number.

“Debbie Watson, Abigail’s mom, got a message just the other day from two little girls that found her messages in a bottle. They were able to make everything out. She drew a picture of herself; she wrote a letter, and she wrote a big sign that said girls rule,” Chrissy Horning, Delaney’s mom, told Fox 8 News.

The message in the bottle didn’t physically travel far. But it was a very special delivery for Delaney’s  family.

The bright and creative 10-year-old girl, who ran and was active every day, died suddenly as she left her home on the way to school in September.

Doctors say she had an undetected heart defect.

Chrissy said her little angel’s letter was a message not just for the finders but for her family to remind them of Delaney’s special life.

“That letter just showed it. That letter that she wrote showed her excitement about life. It was a whole page long and it was written like the way Delaney writes. She had a lot of dream. She was going to be a residential architect. She was very intelligent; she was a very smart girl.”

The family’s house is full of angels– gifts from friends and family who also miss Delaney so much.

They honored her with a community-wide memorial service just a few days after she died.

Chrissy said having this message in a bottle come back from the sea is a reminder that Delaney will never be truly gone.

“That she’s with us. She’s our angel watching us. It was a sign that she’s here with us, and a sign that we really needed.” Chrissy said.

Chrissy said they didn’t tell the two girls who found the note that Delaney had died.  She said they didn’t want to ruin what was probably a fun time for them just like the fun Delaney and her friend had creating the message in the bottle.