JACKSON TOWNSHIP, Ohio -- A memorial is growing outside of a Jackson Township restaurant where a little girl was killed.

People in the community have dropped off everything from stuffed animals to crayons outside of Ang's Asian Cuisine on Portage Street NW, in honor of 5-year-old Ashley Zhao.

Police say Ashley was found  "deceased and concealed" inside her family's restaurant on Tuesday.

She was reported missing on Monday by her parents, Ming Ming Chen and Liang Zhao, who told police she was last seen in the back room of the restaurant. 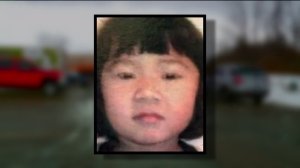 On Tuesday, a very tragic and heartbreaking discovery was made when authorities discovered her body inside the restaurant.

Ashley's mom, Ming Ming Chen, is charged with murder.  Authorities say she struck the child's head "several times with her right fist" and those injuries resulted in Ashley's death.

Ashley's father, Liang Zhao, is charged with complicity to murder and complicity  to commit felonious assault.

Both of the suspects appeared in court Wednesday morning. Bond was set at $5 million each.

COLUMBUS, Ohio (WJW)-- A doctor who joined Ohio Gov. Mike DeWine's news conference on Thursday said the state has not seen the impact of Thanksgiving on coronavirus numbers.

The Ohio Department of Health said 8,921 COVID-19 cases, 82 deaths, 396 hospitalizations and 33 intensive care unit admissions were reported in the last 24 hours. The data is incomplete with thousands of reports pending review, according to the state health department.

Medina, Portage, Richland, Stark and Summit joined Lake and Lorain counties in the highest level of the color-coded map that determines coronavirus risk. The Ohio Department of Health released the latest data on Thursday during Ohio Gov. Mike DeWine's news conference on COVID-19.

SAN FRANCISCO, Calif. (KRON) -- The Department of Defense on Wednesday released the first images of a COVID-19 vaccination record card and vaccination kits.

The cards will be sent out as part of vaccination kits from Operation Warp Speed, the U.S. government's coronavirus vaccine initiative.

U.S. coronavirus deaths top 3,100 in a single day for the first time

Walmart announces 4th round of cash bonuses for employees