MEDINA, Ohio — Medina police say a report of a female with a gun at a Medina medical office building is believed to be a hoax.

At 1:30 p.m. Tuesday, police received a call about a female possibly armed with a gun. The caller said the female was holding hostages at the hospital.

Police say after conducting an investigation and going floor to floor, they determined there was no suspect.  At this point, police say they believe it was a hoax.

Medina Hospital and the medical office building were placed on lockdown Tuesday afternoon after an alert from the hospital about a possible active shooter.

Medina police shortly after gave an update and said they responded to the hospital “regarding a female with a firearm threatening individuals. No shots have been fired. Police have secured the hospital and are searching the facility floor by floor. Please avoid the hospital until police give the all clear. ”

At around 3:30 p.m., a police officer told FOX 8’s Matt Wright the all-clear was given.

Medina Police have given the all clear at Medina Hospital and Medical Office Building. They are no longer on lockdown.

All patients, visitors and employees are safe.

We thank all first responders for their quick actions, as well as our employees for their immediate response.

The Clinic earlier tweeted, “Police are on scene at Medina Hospital responding to a potential active shooter situation in the medical office building. Both the hospital and office building are on lockdown.”

The Clinic advised no one travel to the Medina campus.  But, once again, the all-clear was given.

Police are on scene at Medina Hospital responding to a potential active shooter situation in the medical office building. Both the hospital and office building are on lockdown.

We advise no one travel to the Medina campus.

Several FOX 8 viewers shared screenshots of the message they received from the hospital, saying, “There is a Code Silver/Active Shooter situation on Cleveland Clinic Medina Hospital. Take immediate action to protect yourselves and others. ALICE Options: Alert, Lockdown, Inform, Evacuate. More info to follow.” 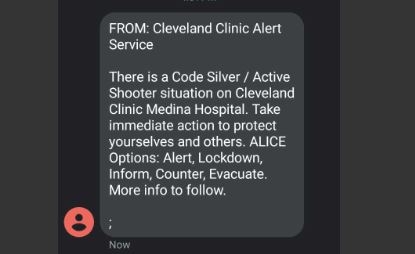 Stay with FOX 8 News and FOX8.com for the latest information.

CLEVELAND (WJW) — A generous donation will help local families in need thanks to The Nexstar Media Charitable Foundation.

On Wednesday morning, FOX 8 Vice President and General Manager Paul Perozeni presented our own Wayne Dawson with a $5,000 check for the Dawson Foundation.

CUYAHOGA FALLS, Ohio (WJW)-- A man was sentenced to five years in prison for trying to attack Cuyahoga Falls High School and threatening an elementary school in Kansas.

Allen Martin Kenna, 20, of Cuyahoga Falls, previously pleaded guilty to attempted use of an explosive device and interstate communication of threats.