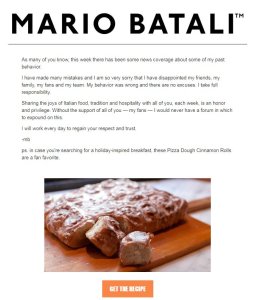 How about some cinnamon rolls with that apology?

In an online newsletter Friday afternoon, celebrity chef Mario Batali — facing allegations that he touched women inappropriately — acknowledged “many mistakes” and apologized for disappointing “my friends, my family, my fans and my team.”

“My behavior was wrong and there are no excuses. I take full responsibility,” the message reads. “Sharing the joys of Italian food, tradition and hospitality with all of you, each week, is an honor and privilege. Without the support of all of you — my fans — I would never have a forum in which to expound on this.

“I will work every day to regain your respect and trust,” the message reads.

Then he added a postscript: A suggestion for a sweet breakfast treat.

“ps. in case you’re searching for a holiday-inspired breakfast, these Pizza Dough Cinnamon Rolls are a fan favorite,” the post reads, followed by a photo and a recipe link.

Emailed recipes from Batali are hardly new — he offers a weekly digest to those who register on his website.

But this one, given what preceded it, drew some public derision.

“If you haven’t seen the Mario Batali apology, you should. Starts off ok, but he includes a recipe at the end,” one tweeter posted Saturday.

“I genuinely thought that ‘Mario Batali includes a cinnamon roll recipe in his sexual harassment apology’ was an onion gag. My bad. 2017 gonna 2017,” says another.

Attempts to reach a media representative for Batali on Saturday weren’t immediately successful.

Allegations of sexual misconduct by the chef surfaced this week in a report published by Eater, the restaurant news site. Eater’s report included four accounts of women who claimed that Batali “touched them inappropriately in a pattern of behavior that appears to span at least two decades.”

The women, some of whom worked for Batali, claimed he had groped them, according to Eater.

ABC announced Friday that it fired Batali from his hosting gig on “The Chew” over the allegations.

The Batali and Bastianich Hospitality Group, a collection of restaurants, announced this week that Batali stepped away from company operations. He remains an owner of the group, which he founded with restaurateur Joe Bastianich. A spokesperson said that Batali and the other owners were reviewing his role.

Not his first apology

Friday’s email wasn’t his first public apology. On Monday, he issued a statement saying that he is “deeply sorry” for any pain or humiliation he has caused.

Neither that statement nor Friday’s newsletter referred to the Eater report. But Monday’s statement added: “Although the identities of most of the individuals mentioned in these stories have not been revealed to me, much of the behavior described does, in fact, match up with ways I have acted.”

Batali had been a host on ABC’s “The Chew” for the past several years. An ABC representative said Monday he was stepping away from that show while ABC reviewed the allegations.

CLEVELAND – Cleveland council members are reacting with strong words about how the protests erupted in downtown Cleveland and how prepared the city was to handle it.

CINCINNATI, Ohio (WJW) — An Ohio animal hospital is looking to help horses that were injured during the police violence protests this weekend.

Demonstrators across the nation took to the streets in response to the death of George Floyd. He died Monday while in Minneapolis police custody.

LOS ANGELES (AP) — The mayor of Atlanta, one of dozens of U.S. cities hit by massive protests in recent days, has a message for demonstrators: “If you were out protesting last night, you probably need to go get a COVID test this week.”

As more beaches, churches, schools and businesses reopened worldwide, civil unrest in the United States over repeated racial injustice is raising fears of new coronavirus outbreaks in a country that has seen more infections and deaths than anywhere else in the world.