COLUMBUS, Ohio –  KMG, the Dutch company that manufactures amusement rides, including the Fireball, which malfunctioned and killed one person at the Ohio State Fair last month, has released what they say is the cause of the deadly accident.

In a letter posted on their Facebook page, KMG says that “It was determined that excessive corrosion on the interior of the gondola support beam dangerously reduced the beam’s wall thickness over the years. This finally led to the catastrophic failure of the ride during operation.”

The company goes on to say that their investigation into the 18-year-old ride included a visit to the scene and a review of video footage of the incident. A metallurgical inspection was also conducted.

The company states that they have reviewed the results of the inspection  and have “worked with industry safety experts to develop an inspection protocol in  the form of a Safety Bulletin” that will allow other properly inspected and maintained rides to reopen. 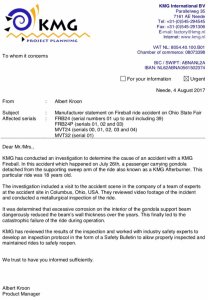 18-year-old Tyler Jarrell, a high school student who recently enlisted in the Marines was killed when the spinning and thrill ride broke apart and sent several passengers tumbling at the Ohio State Fair on July 26th.

Video taken by a bystander of the swinging, spinning Fire Ball ride in action captured a crashing sound. A section holding four riders came apart, and screams could be heard as at least two people were ejected and plunged toward the ground. Other riders were still in their seats as they fell.

Jarrell, of Columbus, was thrown about 50 feet and pronounced dead on the midway.

Four other people, ranging in age from 14 to 42,  who were injured remain hospitalized, including a woman in a coma.

His niece, 36-year-old Tamica Dunlap, is in serious condition.

Tears and laughter during Dick Goddard’s final forecast in 2016

CLEVELAND (WJW)-- It was an emotional day at FOX 8 when legendary weatherman Dick Goddard delivered his final forecast in November 2016.

Goddard passed away on Tuesday at the age of 89, leaving a lasting legacy in Northeast Ohio.

Cuyahoga County Board of Health responds to commissioner appearing in blackface

PARMA, Ohio (WJW)-- The Cuyahoga County Board of Health released a statement on Tuesday after information surfaced that health commissioner Terry Allan appeared in blackface makeup years ago.

Board members said Allan is capable of continuing to lead the agency during the ongoing coronavirus pandemic, in a letter on Tuesday. They cited his work related to infant mortality, lead poisoning prevention and COVID-19.

CLEVELAND (WJW)-- The Cleveland Department of Public Health said there were 25 more confirmed cases of coronavirus in city residents on Tuesday, ranging from teens to those in their 90s.

The total number of confirmed cases for Cleveland is 4,337, according to the health department. There were no additional deaths reported on Tuesday. That number remains at 84.

Tears and laughter during Dick Goddard’s final forecast in 2016

Cuyahoga County Board of Health responds to commissioner appearing in blackface