Many of Sgt. Acklin’s colleagues were in court Monday in a show of support.

Authorities were attempting to serve felony warrants on Brannon in Rootstown in February 2019 when it happened. 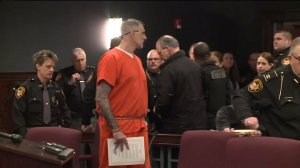 A press release stated Brannon ignited a can of flammable liquid and “proceeded to make threats that he was going to, ‘Kill the cops.'”

He threw the ignited can of liquid at officers, striking Sgt. Acklin, according to the sheriff’s office.

Sgt. Acklin was burned over 20% of his body.

Acklin was present in court Monday but did not speak. A colleague read a statement on his behalf  and also on the behalf of his daughters.

His wife, Josee Riedel-Acklin spoke, recounting the healing journey her husband has had to undergo.

Brannon spoke as well expressing regret and apologies to Acklin and the other officers involved.

WILLOUGHBY, Ohio (WJW) — Willoughby police are searching for the owner of a missing dog.

Officers found the pup in downtown Willoughby late Thursday morning. They took her to the police station where they say she was "serving hard time with pampering dispatchers."

The roundtable discussion was sponsored by the Take Control Teen Driving Program, which is designed to teach teens how to drive in severe weather and other emergency situations.

BRISBANE, Australia (WJW) – The family of a 9-year-old Australian boy who went viral after his mother shared a video on social media of him being bullied at school has declined a crowdfunded trip to Disneyland.

Quaden Bayles, who was born with a form of dwarfism called Achondroplasia, won the support of well-wishers around the world who saw the video.