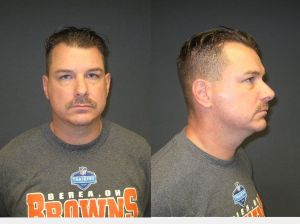 LORAIN, Ohio– The man who recorded the aftermath of a crash that took the life of a 17-year-old boy is now behind bars on an intimidation charge.

Paul Pelton was arrested on a vehicle trespass charge after Lorain police said he didn’t try to help the teenage passenger or the driver. Instead, he recorded video on his cell phone and is accused of opening the car door as he continued to record.

It happened after the teens crashed into a home on Kansas Avenue in Lorain in July. Police said the 17-year-old driver was incapacitated and the passenger, Cameron Friend, was left unconscious.  He was taken to an area hospital, where he died from his injuries.

On Friday, Lorain police said Pelton was accused of recently going to the home of the teenage boy who survived and trying to make a deal with him, so that the boy would say that Pelton had permission to enter the car. There was a warrant out for Pelton on an intimidation charge. Police said on Sunday, Pelton turned himself  in and he is behind bars.

AKRON, Ohio (WJW) -- Akron Police on Monday kicked off a campaign they hope will attract at least 25 new recruits to the department at a time when the actions and decisions of officers are under a microscope, impacting recruiting and retention across the country.

"We are looking for people who want to do a good job for the citizens of the City of Akron. We are looking for a diverse population to match the diversity here in the city," said acting Police Chief Mike Caprez.

COSHOCTON, Ohio (WJW)-- A search party looking for a missing Ohio woman found her body in a vacant home.

Brianna Ratliff, 20, of Coshocton, was last seen on April 15 when she said she was going to the gas station.

(NEXSTAR) -- Marvel Studios is preparing to drop a new superhero on us late this fall. "Shang-Chi and the Legend of the Ten Rings" will debut in September. The film will feature a largely Asian cast, a first for Marvel.

In the newly released trailer for the film, Shang-Chi, played by Simu Liu, is seen living in modern-day San Francisco but escaping a demanding childhood and orders from his father to "take his place" in the family. The clip gives us a glimpse of Shang-Chi smashing up the city (like the Hulk and Ant-Man before him) but with comic relief from veteran actor Awkwafina.

Cuyahoga Falls brings back movies in the parks

See the NFL Draft in style: Cleveland sets up 3 watch zones across downtown