CLEVELAND, Ohio -The man on trial for robbing and killing a couple inside their car dealership expressed his condolences to the son of the victims during testimony Wednesday.

Joseph McAlpin, 31, is accused of breaking into Mr. Cars on East 185th Street in April 2017 and shooting Trina Tomola Kuznik and Michael Kuznik in the heads as they prepared to close for the day.

McAlpin, who is representing himself at trial, addressed the victims’ son before questioning him during cross examination.

Trina’s son — Michael’s stepson — Colin Zaczkowski, who was 19 at the time, went to the car lot and discovered their bodies after the family grew worried because they did not come home as planned. He was the first witness to testify. 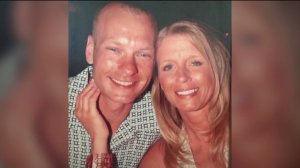 Zaczkowski said that when he arrived at the dealership, it was odd that the lights were turned off. He testified that he looked in the showroom and saw that pictures on the wall were crooked, chairs were on their sides and a candy machine was knocked over and broken.

When he stepped inside, Zaczkowski said he saw what he believed to be the body of his mother, Trina, laying on the ground behind a desk.

“I assumed that it was her just by the fact that she was always the one in the showroom behind the desk,” Zaczkowski told a prosecutor. “As soon as I saw what I saw in the showroom, I ran out.”

Zaczkowski testified that he then called 911 and was told all operators were busy. A 911 operator then called back, and an audio recording of the call was played in court.

Prosecutors played police body camera video that showed the first officers arriving at the scene, meeting medics who were inside the dealership, and securing the scene.

They also showed the jury hours of grainy surveillance footage captured by a nearby business on the day of the murders.

Around 5:30 p.m., two people could be seen moving cars around and entering the showroom, and then a third person followed them inside a short time later. More of the video was expected to be played when the trial resumes Thursday morning.

Prosecutors said McAlpin committed the murders, and then he and two other men stole a Mercedes and BMW from the dealership. Jerome Diggs, 24, and Andrew Keener, 25, were arrested and charged with aggravated murder. Keener pleaded guilty to a reduced charge of involuntary manslaughter and grand theft.

Prosecutors said police identified McAlpin as a suspect through DNA evidence found at the dealership and inside the BMW. Investigators said cell phone records place him at the murder scene.

McAlpin was indicted on 25 charges including aggravated murder, aggravated robbery, kidnapping and cruelty to animals.

He was previously served nine years in prison for a 2009 aggravated robbery case.
McAlpin faces the death penalty if convicted.

Is a used electric vehicle a bargain or a trap?

Myles Garrett out for Sunday’s game

Blessing of the Animals in Cleveland 2022

Kirtland secures win over Perry Game of the Week …

Scores are in for Week 7 of Friday Night Touchdown

Ian bringing rainfall along east coast, but what …

Is a used electric vehicle a bargain or a trap?

When could it snow in Northeast Ohio?