CLEVELAND-- The man who pleaded guilty in the death of 19-year-old Tierra Bryant was sentenced to 23 years in prison Monday afternoon.

Bryant was last seen on March 30, 2015 on Bagley Road in Middleburg Heights. Her body was found more than two years later. 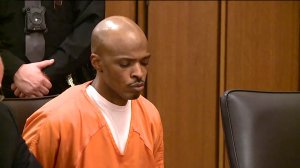 Cuyahoga County Common Pleas Judge Michael Jackson sentenced Hunt to 15 years for the murder and an additional eight years because he is a repeat violent offender.

Bryant's mother Tameka Car described her family's suffering, not knowing what happened to the 19-year-old for years. She said Hunt treated Bryant like a dog.

On the day she disappeared, Bryant was at the Motel 6 in Middleburg Heights with Hunt. Police said she called a family friend, saying she felt uncomfortable and wanted to be picked up. But she never left the motel to meet her friend.

Defense attorneys said Bryant maced Hunt and tried to rob him, and she was injured during a struggle.

Hunt was arrested in Sacramento, California in June 2017. Prosecutors said he confessed to the crime and provided information on where to find the remains.

Investigators began searching a wooded area near Mussey Avenue in Elyria. After a few days, they located partial skeletal remains in a hole about 4 feet deep. They were later identified using dental records and tattoos.

Bryant was featured as part of FOX 8's Missing segment.

(NEXSTAR/WJW) -- The Dow Jones Industrial Average traded above 30,000 points for the first time Tuesday as investors were encouraged by the latest progress on developing coronavirus vaccines and news that the transition of power in the U.S. to President-elect Joe Biden will finally begin.

President Donald Trump spoke during a very short briefing just after the news, calling it a "sacred number." and crediting, in part, the coronavirus vaccines that are in the works.

WASHINGTON (NewsNation Now) — In one of his first moves after the Trump administration approved the start of the presidential transition, Joe Biden is set to formally introduce some of the appointees to his national security and foreign policy teams Tuesday.

The president-elect on Monday announced several key Cabinet picks, which include former Secretary of State John Kerry and Janet Yellen, the first woman to lead the Federal Reserve.

CLEVELAND, Ohio (WJW) – A Cleveland woman is living proof, she says, that poetry has the power to heal and save lives. She overcame a life of poverty and is now using spoken word as a tool for social justice.

FOX 8’s Jennifer Jordan has the story in the video above.