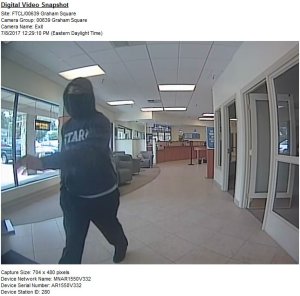 STOW, Ohio — Stow police are searching for the man accused of robbing a bank after threatening to shoot the tellers Saturday afternoon.

According to Stow police, the suspect entered the Fifth Third Bank, 911 Graham Road, at around 12:30 p.m. He then approached the counter  and then jumped over it.

No weapon was brandished when he demanded money, but the suspect did threaten to shoot employees. Before he left, he forced them into an office and threatened again to shoot anyone if they didn’t give him the opportunity to get away.

No one was hurt.

The suspect did make off with a small amount of cash.

The man was wearing black pants, black shoes and a black sweatshirt with “Stark State” written on the front.

Anyone with information is asked to call Stow police.

(CNN) -- It started with a routine police call reporting someone used a counterfeit bill at a store in Minneapolis.

What followed was a series of events that ended with George Floyd, 46, dead after a white police officer used his knee to pin him down in an incident captured on video. Floyd, who is black, died Monday night after he was arrested for the alleged forgery.

COLUMBUS, Ohio (WJW) - A Columbus police officer who was shot Thursday in the line of duty was investigating a drug-trafficking operation, according to Ohio Attorney General David Yost.  Yost said as the officers entered the home, a resident started shooting through the wall.  Yost said the officer was shot once in the bulletproof vest and once outside the vest. The officer has not been identified but is expected to…