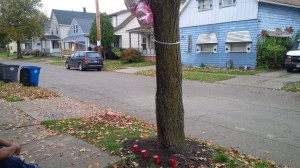 CLEVELAND, Ohio — A man has been arrested in connection with the shooting death of his 12-year-old step-daughter Thursday night.

According to police, the 59-year-old suspect faces charges of aggravated murder, felonious assault and domestic violence in the case.

Police responded to the 6900 block of Clement around 7 p.m. to reports of shots fired.

The man is accused of firing multiple shots from a handgun striking 12-year-old Davia Garth and her mother, Sonya Gray-Garth, during a domestic argument.

Both were taken to MetroHealth Medical Center. Davia died at the hospital.

The mother spoke to Fox 8’s Peggy Gallek over the phone, and said she had been in the process of divorcing the man at the time. He did not live with her and her daughter.

CLEVELAND (WJW) — Investigators say two shootings on Cleveland's west side that resulted in the deaths of a teen and a man are connected.

Officers were called to W. 85th and Detroit at 9:50 p.m. Monday for reports of a man shot. Officers learned that residents heard shots fired and then found the victim on the porch, bleeding.

CLEVELAND (WJW) -- The Cleveland Department of Public Health (CDPH) is reporting 50 more confirmed cases of COVID-19 and no new fatalities.

According to a press release, this brings the new total to 1,523 cases and 50 deaths.

ASHTABULA, Ohio (WJW) -- Troopers are investigating after a 32-year-old woman was killed in a deadly crash on Thursday.

According to the Ohio State Highway Patrol, it happened around 11:15 a.m. on Griswold Road near West 20th St. in Ashtabula.

Topgolf reopens in Independence on June 1

I-TEAM: Why haven’t relief funds for Cleveland renters and landlords been distributed yet?

WATCH: Woman’s brakes give out on highway, Ohio troopers help her stop car