CONNEAUT, Ohio– He was on the run for nearly three weeks. On Friday, the man accused of murdering a 13-month-old girl appeared in court. 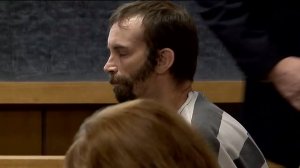 Joshua Gurto, 37, is charged with aggravated murder, murder, rape, felonious assault and domestic violence. He pleaded not guilty and his bond was set at $1 million.

The badly beaten body of Sereniti Blankenship-Sutley was found in her Conneaut home on Oct. 7. Her mother was Gurto’s girlfriend.

After the discovery, Gurto took off, hitchhiking his way to Pennsylvania. He was taken into custody on Oct. 27 after being spotted on surveillance video at a convenience store outside Pittsburgh.

Gurto was extradited back to Ohio. He could face the death penalty if convicted.

Family of the victim packed the courtroom on Friday. Many of them wore pink shirts.

Family and friends  of Sereniti and her family will hold a fundraiser in Sereniti’s honor on Saturday at Amboy United Methodist Preschool. All proceeds will go to the Halo program to help purchase gifts for children at Christmas.

CLEVELAND (WJW) — Clouds increase Saturday night and there is a slight chance of lake-induced snow showers through early Sunday morning.

No accumulation is expected, but it will be unseasonably chilly! Highs will only make it into the low 30s with partly to mostly sunny skies.

CHICAGO (NewsNation Now) — An investigation found that more than 75,000 complaints about the Seresto brand of flea and tick collars have been sent to the Environmental Protection Agency. Investigators have linked the deaths of nearly 1,700 dogs and cats, according to a report co-published by Midwest Center for Investigative Reporting and USA TODAY.

The collars use two types of pesticides to kill fleas and ticks. The EPA said the collars are safe but that some pets may be sensitive to the pesticide combination.

‘I am taking your car, too’: Man arrested after allegedly stealing woman’s purse and vehicle, Lake County Sheriff says

According to the Lake County Sheriff's Office, officers responded to Guhde Flooring in Painesville Township for reports of a vehicle theft just before 11 a.m.

‘I am taking your car, too’: Man arrested after allegedly stealing woman’s purse and vehicle, Lake County Sheriff says

‘These children need you’: Lt. Governor urges Cleveland teachers to return to classrooms

One injured in shooting near Morse Road Walmart in Columbus

Colleges across the nation, including Ohio State, cancel spring break in response to pandemic

6 ways to save on gasoline as prices continue to rise