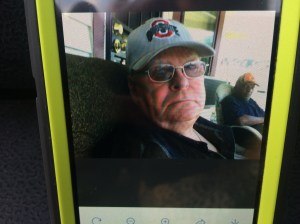 The house was completely engulfed by the time fire crews arrived at about 5 a.m. Thursday. 75-year-old Roma Sparks was located unconscious near the back door and later died at the hospital.

Neighbors said while the flames burned, Sparks’ neighbor, Charles Davenport, stood across the street confessing that he poured gasoline on the front of the house and lit it.

Davenport has since been arrested on aggravated arson and aggravated murder, but has not yet been charged.

“The guy knocked on my door, told me to move my truck because he was about to do something to that house,” neighbor Ryan Mahone said.

Davenport’s mother told FOX 8 News he was recently released from the hospital for mental health treatment and something Sparks did must have made him snap.

3100 block of W56 this morning. pic.twitter.com/DzzzEHfTTC

All 100 lab monkeys accounted for after several escape Pennsylvania crash

DANVILLE, Pa. (AP) — The last of the escaped monkeys from the crash of a truck towing a trailer load of 100 of the animals was accounted for by late Saturday, a day after the pickup collided with a dump truck on a Pennsylvania highway, authorities said.

Several monkeys had escaped following Friday’s collision, Pennsylvania State Police said. But only one had remained unaccounted for as of Saturday morning, prompting the Pennsylvania Game Commission and other agencies to launch a search for it amid frigid weather.

CLEVELAND (WJW) — Starting this weekend, Cleveland and East Cleveland residents can visit the Cleveland Museum of Natural History for free on Sundays.

CLEVELAND (WJW) — The extreme cold caused for a busy day for the Cleveland Division of Fire. They had to rescue people trapped in their cars after a water main break. Firefighters are now reminding people to never drive through standing water.

Photos captured the heroic moments the Cleveland fire department rescued three people Saturday morning. Two cars got stuck in water on East 152nd and Woodworth. One man climbed out of his sunroof before being rescued. The second car had a father and his 14-year-old son.

Photos: Buy this property with tranquil views, and get an entire Old West-style town too

How the next COVID variant may emerge

Talks under way on compromise to gerrymandered Ohio Statehouse maps

Stimulus checks: What to know before filing your tax returns