NORTH ROYALTON, Ohio -- The man accused of killing a woman and her two daughters in their North Royalton home appeared in court Thursday morning.

George Brinkman Jr., 45, was charged Wednesday with aggravated murder, kidnapping and tampering with evidence in the deaths of Suzanne Taylor, 45, Taylor Pifer, 21, and Kylie Pifer, 18, were found Sunday in their home. 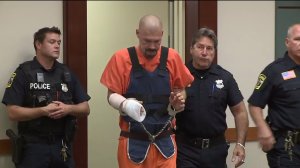 Brinkman was charged Tuesday with murder in the slayings of his employers, 71-year-old Rogell Eugene John and 64-year-old Roberta Ray John. The couple's bodies were found Monday in their North Canton home. Authorities say they apparently were shot.

CANTON, Ohio (WJW) -- Authorities in Stark County say they are looking for another inmate from the Stark County Regional Community Correction Center.

Canton police say Helina Marie Roethel, 24, did not return to the Louisville facility from her supervised release.

AKRON, Ohio (WJW) -- Going to prom is one of the biggest high school traditions, but it can be expensive.

An organization is helping students with a prom dress giveaway.

FOX 8 Extra explores the power of Superman with science

Robyn Kaltenbach is the Director of Program Development.

FOX 8 Extra explores the power of Superman with science

Migrating birds show up on weather radar in Key West

No confirmed cases of coronavirus in Ohio; One case remains under investigation

Get paid to binge-watch the ‘Fast & Furious’ saga