CLEVELAND– The man accused of kidnapping his son, Julian, from Alabama in 2002 when the boy was 5, has now been indicted on several charges.

Bobby Hernandez, 53, is accused of taking his son from the home of the child’s mother and living with him under other identities in Cleveland. Hernandez was arrested on Nov. 2 after the FBI received a tip.

He faces a total of 32 counts: 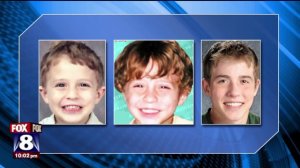 The Cuyahoga County Prosecutor’s Office said the tampering and forgery charges are from Hernandez’s alleged repeated falsification of records including his son’s birth certificate to enroll his son in school and his own driver’s license and certificate of title.

Prosecutor McGinty said, “Mr. Hernandez selfishly deprived this child of his mother, and the mother her child. They lost any chance to bond, nurture and enjoy the benefits of this vital relationship. This indictment should send a strong message to anyone considering stealing their child.”

(WJW / AP) - The attorney for Brian Laundrie's family says Laundrie left home without his wallet and cell phone on Tuesday, Sept. 14, according to reports from NewsNation.

(WJW) - The FOX 8 I-Team has obtained video showing how Cleveland Police tried to stop a man with a hatchet on city streets before officers shot him and left him critically hurt.

The I-Team now has pictures of the damage that police say the man with the hatchet did to an ambulance.

GLENWOOD SPRINGS, Colo. (KDVR) – A new report out Friday from investigators with the Colorado Department of Labor and Employment found that the 6-year-old Wongel Estifanos was not wearing a seat belt when she died on the Haunted Mine Drop Ride at Glenwood Caverns Adventure Park earlier this month.

According to the report, Estifanos was sitting on the two seat belts instead of wearing them across her lap before the Haunted Mine Drop ride took off.

Drivers beware: Here are some of the deadliest road stretches in Ohio

Who’s eligible for Pfizer booster shots in US?

Darker earlier: When’s the next time the sun sets after 8 p.m.

Where is Brian Laundrie? Search continues as officials offer insight on his whereabouts