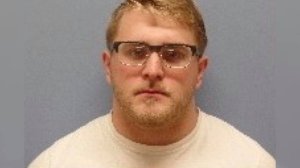 SANDUSKY, Ohio — An Indiana man was arrested at Kalahari Resorts Sunday after three underage girls said he inappropriately touched them.

According to Erie County Sheriff’s Office reports, it happened at just after 9 p.m. Sunday.

At the time, two of the three juveniles were in the arcade area. One of the girls was playing a game when a man came up behind her and brushed her buttocks. He didn’t say anything and walked away, reports state.

After the girls moved to a different area of the arcade, the second juvenile said she was bent over putting a game card into a machine when she felt a brush against her buttocks. She said the same man was standing there, said ‘sorry’, and walked away.

A third juvenile was at the arcade with her mother at around the same time. She told her mother she was near the bathroom area when a man brushed up against her and touched her buttocks. She said he did so again in another area of the arcade. She said the man used his hand to touch her buttocks both times.

After security was notified, a still image was shown to the girls, and they confirmed the man shown was the man who touched them.

When authorities arrived, they located the suspect in the water park area. He told police that at the time of the allegations, he’d been frantically searching for his girlfriend after they got separated. He said he didn’t intentionally grab or touch anyone. He denied bumping into the juveniles, reports state.

He was taken into custody.

Reports state that security video shows the incidents occur. Police said it did not appear as though Arven was hurried or frantic.

Arven was booked into the Erie County Jail.

CLEVELAND (WJW) -- Flurries and light snowflakes are flying across Northeast Ohio Monday evening, however, accumulation is not expected.

A couple of weather systems are on the way. Here is a look at the maps in motion:

CLEVELAND (WJW) -- Two years after their mother was gunned down while walking her dog in a random act of violence, a local family is asking for the public's help solving the murder.

Sheila Wallace, 58,  was walking her dog in McGowan Park on Cleveland’s west side around 7 p.m. January 17, 2019 when someone shot her several times.