CLEVELAND — Crews are in town filming a new Matthew McConaughey movie — and it’s all action in one east side neighborhood.

The area near East 128th Street and Miles Avenue in Cleveland was bustling Friday. 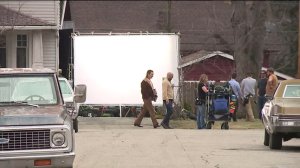 The movie, “White Boy Rick,” is being produced by LBI Entertainment and Protozoa Pictures, according to a release provided by Sony Pictures Entertainment.

According to the release, “White Boy Rick” will film primarily on location in Cleveland through early June with a couple of days in Detroit and Las Vegas.  The film is scheduled for release through Sony Pictures on January 12, 2018.

The movie is based on true events, set in the 1980s in Detroit at the height of the crack epidemic. It tells the story of a blue-collar father and his teenage son, who became an undercover informant and later a drug dealer.

He was later sentenced to life in prison.

BETHPAGE, New York (WJW) -- An animal rescue in New York is sharing the heartbreaking story of four dogs who lost both of their owners to COVID-19.

The announcement comes as the White House looks to speed the production of the single-dose vaccine. Officials have said J&J faced unexpected production issues with its vaccine and produced only 3.9 million doses ahead of its receiving emergency use authorization on Saturday. The company says it is on pace to deliver 100 million doses by the end of June.