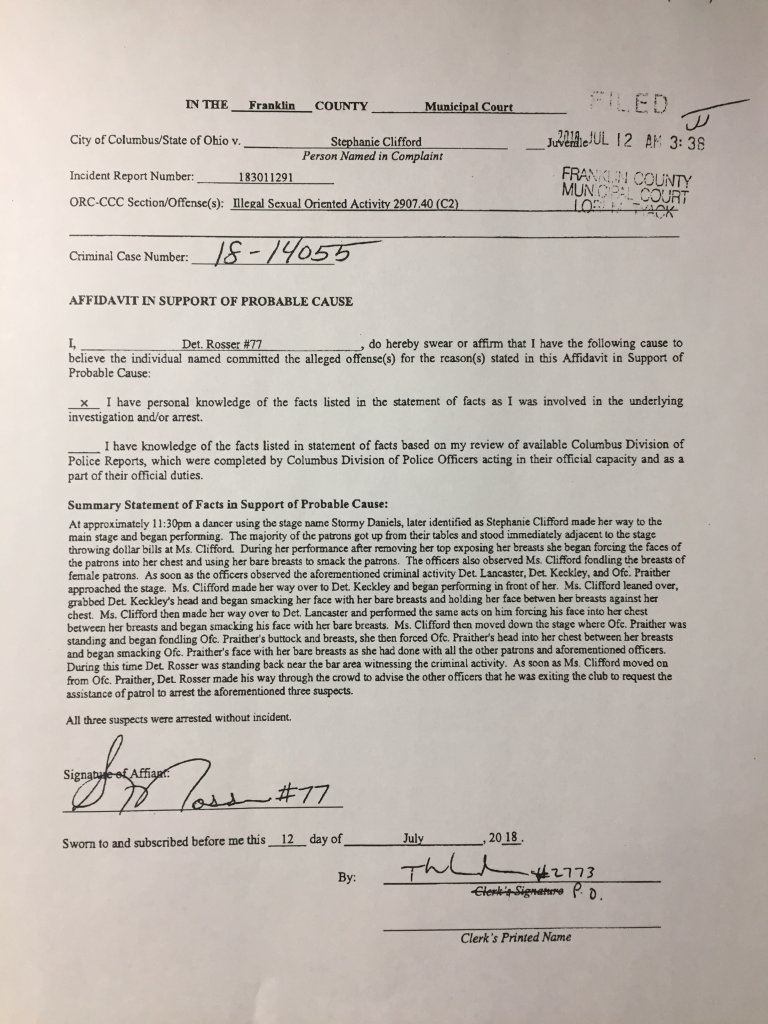 Daniels was arrested at Sirens strip club and is accused of letting patrons touch her in violation of a state law, her attorney said early Thursday.

According to court documents, Daniels took the stage at the club around 11:30 p.m. Wednesday. After taking off her top, Daniels “began forcing the faces of the patrons into her chest and using her bare breasts to smack the patrons.”

Police said Daniels made her way over to another detective and performed the same acts on him.

A third officer, according to the documents, had her buttock and breasts fondled by Daniels before she “began smacking [the officer’s] face with her bare breasts.”

Another detective who was standing back by the bar said he witnessed the “criminal activity.” As soon as Daniels moved away from the officers, he exited the club and requested the assitance of patrol to arrest Daniels and two others.

According to WSYX/WTTE in Columbus, the two others who were arrested were also dancers.

An Ohio law known as the Community Defense Act prohibits anyone who isn’t a family member to touch a nude or semi-nude dancer.

Daniels, whose real name is Stephanie Clifford, was charged with three misdemeanor counts of “illegal sexually oriented activity.” She was released from jail around 6:30 a.m. Thursday morning, WSYX/WTTE reported. 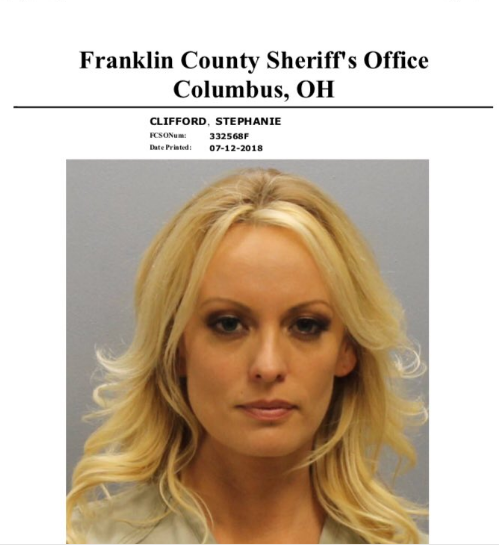 Avenatti tweeted just before 7 a.m. Thursday that Daniels would “issue a plea of ‘Not Guilty'” to the charges. She is scheduled to appear in court on Friday morning.

My client @StormyDaniels will issue a plea of “Not Guilty” to the three misdemeanor charges.

“This was a complete set up,” Michael Avenatti, Daniels’ attorney, tweeted. “It’s absurd that law enforcement resources are being spent to conduct a sting operation related to customers touching performers in a strip club in a non-sexual manner.”

Just rcvd word that my client @StormyDaniels was arrested in Columbus Ohio whole performing the same act she has performed across the nation at nearly a hundred strip clubs. This was a setup & politically motivated. It reeks of desperation. We will fight all bogus charges. #Basta

She was arrested for allegedly allowing a customer to touch her while on stage in a non sexual manner! Are you kidding me? They are devoting law enforcement resources to sting operations for this? There has to be higher priorities!!! #SetUp #Basta

Clifford was scheduled to perform again on Thursday night. Avenatti tweeted an official statement from Daniels.

It read, “As a result of what happened last night, I will unfortunately be unable to go forward with tonight’s scheduled performance. I deeply apologize to my fans in Columbus.”

Official Statement From @StormyDaniels: As a result of what happened last night, I will unfortunately be unable to go forward with tonight's scheduled performance. I deeply apologize to my fans in Columbus.

Earlier, Avenatti tweeted that he will “vehemently contest” the charges against Daniels.

We expect her to be released on bail shortly. We also expect that she will be charged with a misdemeanor for allowing “touching.” We will vehemently contest all charges. #Basta

Daniels has said she had sex with President Donald Trump in 2006 when he was married, a claim Trump has denied. She’s suing Trump and his former longtime personal attorney, Michael Cohen, and seeking to invalidate a nondisclosure agreement that she signed days before the 2016 presidential election.

Daniels performed at the Diamond Club in Cleveland back on June 29th and June 30th.

Ohio among states with most flu cases

Ohio among states with most flu cases

NE Ohio teen hopes to find family to adopt her

Glenville Tarblooders in FOX 8 studios ahead of victory …

Deputies search for two escaped inmates from the …

Ohio among states with most flu cases this season

How long you’ll wait for an ambulance in Cleveland: …

Why last-minute holiday gifts could save you money

NE Ohio teen hopes to find family to adopt her

How long you’ll wait for an ambulance in Cleveland

Wheat pennies could bring you a pretty penny

Why last-minute holiday gifts could save you money

Best gifts on sale today for under $50

Wheat pennies could bring you a pretty penny

Tax credits returning to 2019 levels: What to know