Last week, Weger tried to removed six of the seven city council members, accusing them of gross misconduct. He said they improperly hired a law director, passed charter amendments without input from the public and drastically cut his administrative budget.

Weger changed the locks on city hall and said he would appoint unelected council members as replacements. 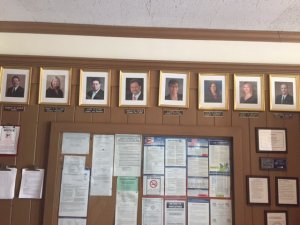 “Allowing Weger to oust elected officials contrary to law and without due process is fundamentally inconsistent with the democratic process, and designed to create a government run through a dictatorship rather than through the proper legislative, executive and judicial process,” the city said in a news release on Tuesday.

“Mayor Robert Weger’s actions in removing plaintiff council members are stayed pending further order of court, the affect council members and their legislative employees are accordingly restored to their positions with all attendant powers and privileges,” the judge wrote.

COLUMBUS, Ohio (AP) — The Ohio Board of Pharmacy has agreed to more than double the number of medical dispensaries in the state over the next year to deal with patient complaints about access and high prices.

The board voted Monday to add 73 dispensaries to the 52 currently operating. The application process is expected to be announced sometime this spring or summer.

WASHINGTON (AP) — The Biden administration is privately weighing how to handle the upcoming verdict in the trial of former Minneapolis Police Officer Derek Chauvin, including considering whether President Joe Biden should address the nation and dispatching specially trained community facilitators from the Justice Department, aides and officials told The Associated Press.

Closing arguments began Monday in Chauvin’s trial with a prosecutor telling jurors that the officer “had to know” he was squeezing the life out of George Floyd as he cried over and over that he couldn’t breathe and finally fell silent. Chauvin faces murder and manslaughter charges.

LONDON (AP) — Now that the Royal Family has said farewell to Prince Philip, attention will turn to Queen Elizabeth II’s 95th birthday on Wednesday and, in coming months, the celebrations marking her 70 years on the throne.

This combination of events is reminding the United Kingdom that the reign of the queen, the only monarch most of her subjects have ever known, is finite. That has triggered speculation about how long she will remain on the throne, what the monarchy will look like in the future and, for some, even whether it should continue to exist.