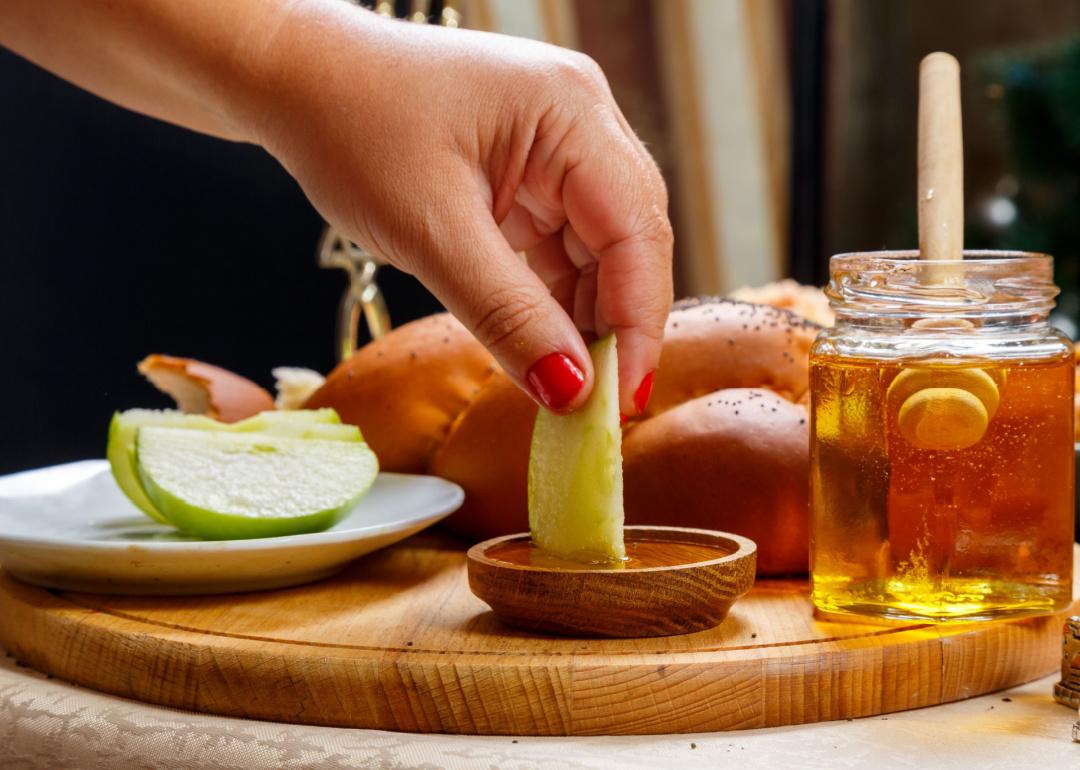 Jewish holiday recipes for everyone to try

Jewish cuisine has long been influential in the U.S. and global food culture. Diaspora brought traditional Jewish foods across the world: Over centuries and continents, Jewish foods became part of the places Jews have migrated, just as diverse and rich regional foodways have shaped the evolution and reinterpretation of Jewish food.

Because Ashkenazi Jews (of the Eastern European diaspora) make up most of the Jewish population in the U.S., many familiar Jewish favorites among American Jews and non-Jews hail from Russia, Poland, Germany, and the rest of Central and Eastern Europe. Less ubiquitous but just as delicious is Sephardi cuisine, which encompasses foods of the Spanish diaspora in North Africa, the Middle East, and the Mediterranean.

In honor of Hanukkah beginning Dec. 18—and for eating experiences that can be enjoyed year-round—Stacker compiled a list of 15 global Jewish holiday recipes and their histories from Allrecipes.com, news reports, Jewish historical sites, and Jewish recipe developers. Read on to find classic recipes or to discover a new dish or two. 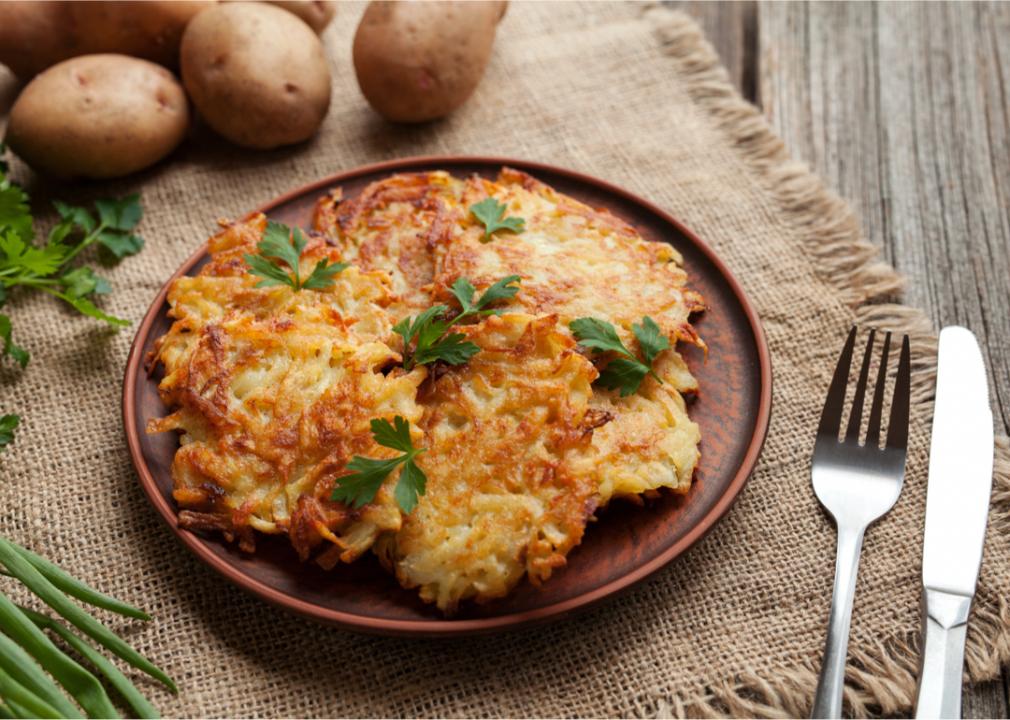 The iconic Hanukkah food is beloved by Jews and non-Jews alike (as most forms of fried potatoes are). But latkes were not always made using potatoes. After the expulsion of Jews from Sicily in the late 1400s, their traditional fried ricotta pancakes spread to northern Italy. It was only in Eastern Europe in the mid-1800s, after a surplus crop of potatoes, that potato latkes became the fritter of choice for Ashkenazi Jews. Whether grating the potatoes and onions by hand, or using a food processor to cut down on prep time, these latkes fit the bill when topped with applesauce, sour cream, or lox. 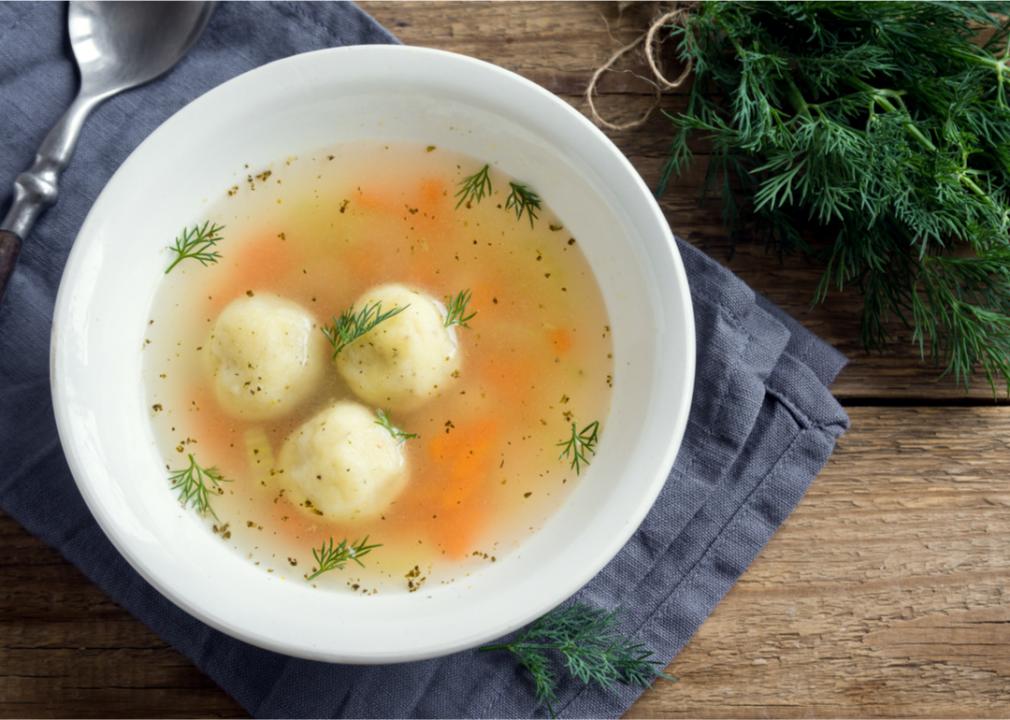 A staple at the Passover table and your local diner alike, matzo ball soup is easy to make using matzo ball mix and a few pantry ingredients, but is greatly improved by making a comforting, from-scratch chicken soup or your favorite hearty vegetable stock. Originally made from the leftover crumbs of matzo, Central and Eastern European Jews made “knoedel.” In the 1930s, Manischewitz began selling matzo ball mix in the U.S., reportedly under the name “Alsatian feathery balls.” 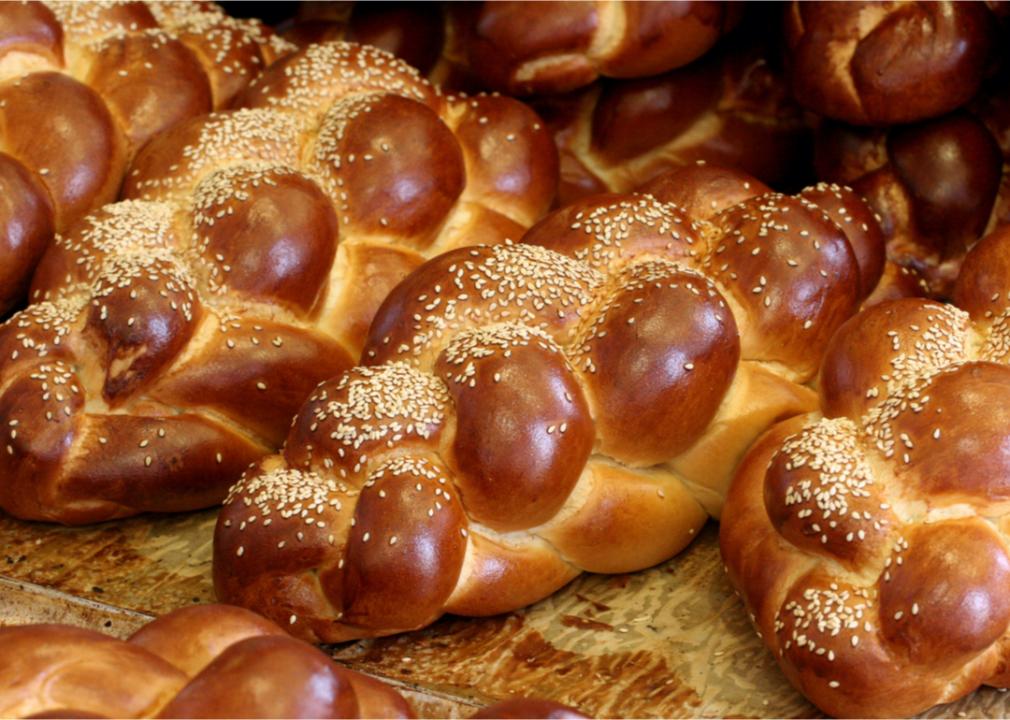 There are few things more enjoyable than a warm, freshly baked challah. Usually intricately braided with a shiny browned outside, challah is a soft and fluffy egg-based bread, mildly sweet from honey or sugar, that is typically served on Shabbat or with other holiday meals. Try this challah smeared with butter and drizzled with honey, made into french toast, or used as a sponge for brisket. 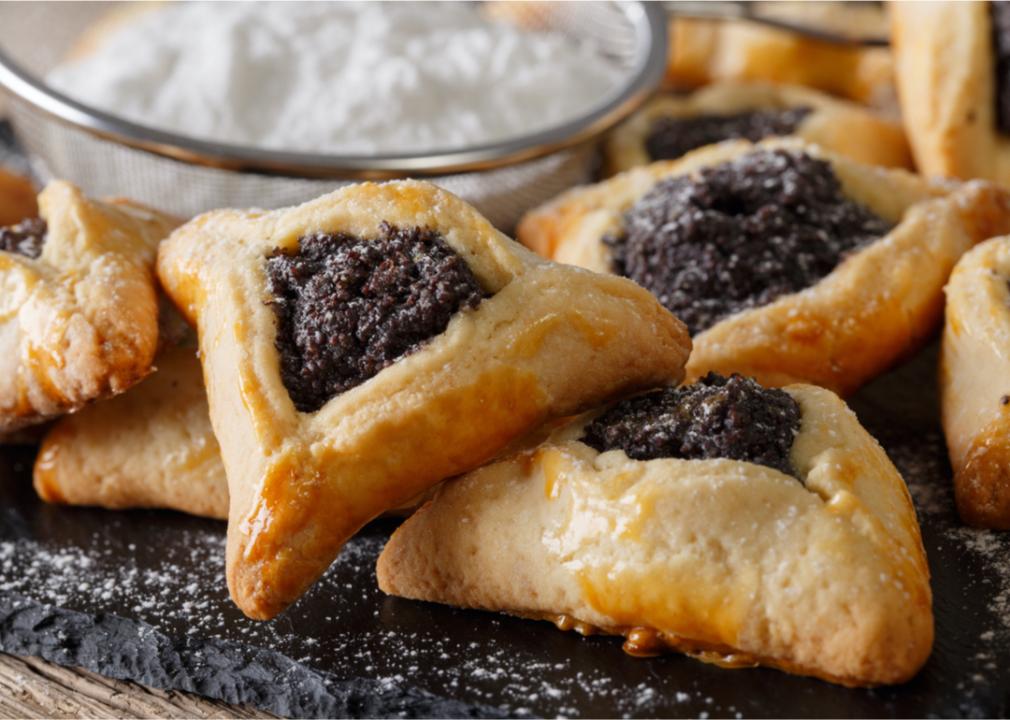 Hamantaschen are triangular cookies traditionally made on Purim, and are usually filled with preserves, poppyseeds, prunes or dates, or even chocolate spread. The shape of the cookie is, like many Jewish foods, symbolic in nature. Most people believe that the triangle mimics the shape of the hat worn by Haman, the villain of the Purim story. They can be made dairy-free, although some prefer swapping out the vegetable oil with butter for a richer dough. The cookies are formed by cutting out circles of dough, placing a dollop of your preferred filling in the center, and folding over three sides to form the quintessential three-cornered shape. 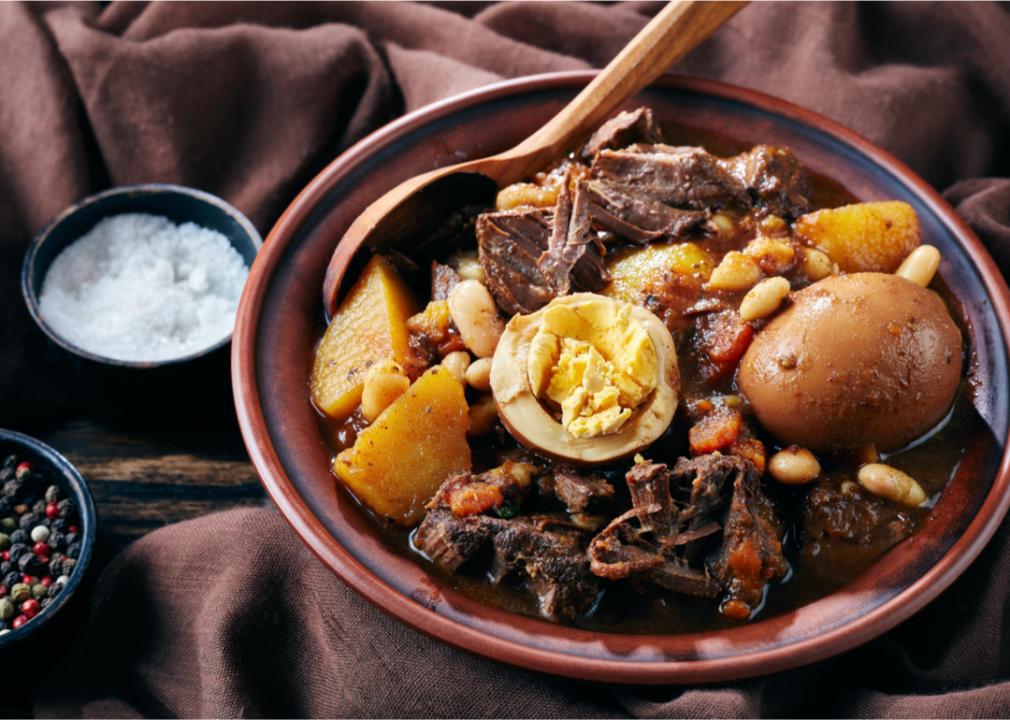 from my point of view // Shutterstock

Dafina is a Moroccan stew typically cooked by Sephardic Jews for Shabbat. Though the one-day cook time can seem daunting, the stew is meant to be simmered slowly over the course of many hours or overnight to avoid cooking on Shabbat. Although there are infinite iterations of dafina, most include beef or chicken, like this recipe, sweet potatoes, a grain such as barley or rice, chickpeas, eggs, and warming spices like cumin, cinnamon, and paprika. A hint of spice from harissa and sweetness from prunes and honey add complexity and warmth to this comforting dish. 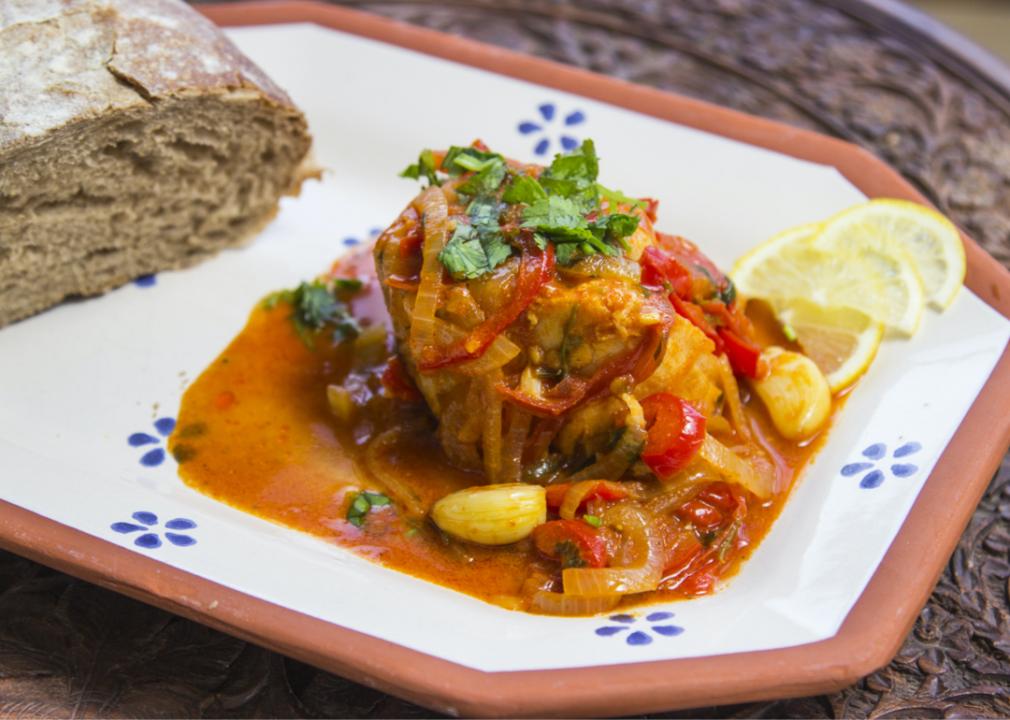 Chraime is a Sephardic dish of fish stewed in a spicy tomato sauce made by Jews in North Africa and the Middle East for Passover, Shabbat, and other holidays. The name “chraime” comes from the Arabic word for “hot,” though spice levels can be adjusted according to personal taste and availability of chilis. This recipe blends paprika and cayenne with olive oil and tomatoes, and is stewed for an hour at low heat, making it a relatively easy centerpiece dish without a lot of prep or active cook time. 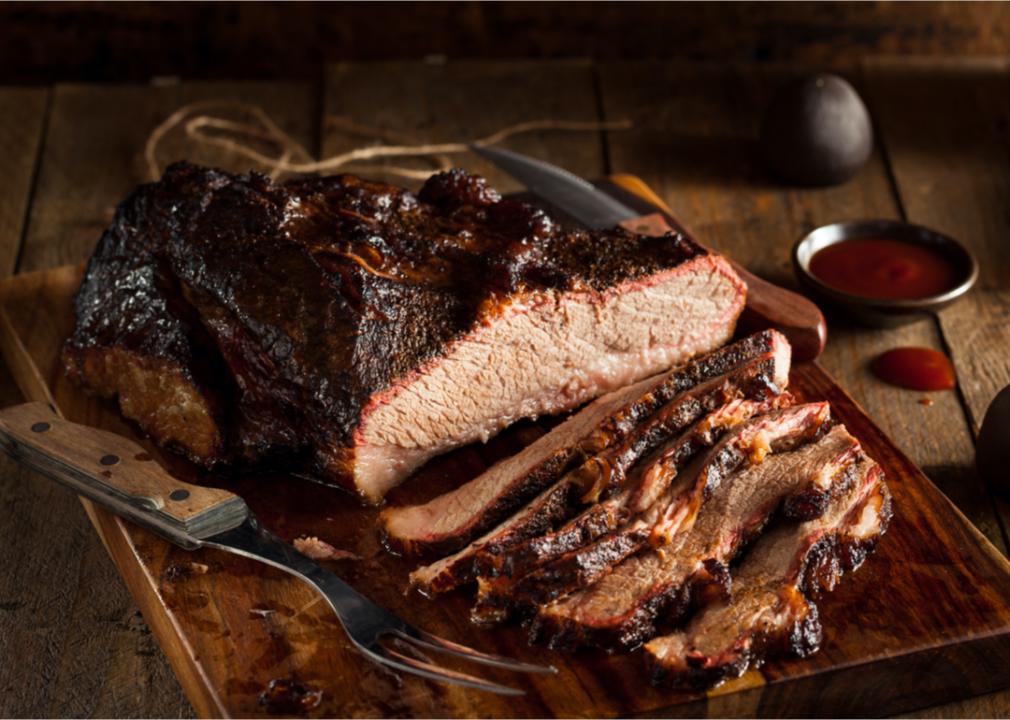 A singularly comforting Passover and Rosh Hashanah dish, brisket has been an important staple in festive Jewish meals for generations. In Eastern Europe, brisket was considered by non-Jews to be a less desirable cut of meat, due to its toughness if not cooked over a long period of time. However, the kosher cut’s lengthy preparation time was not a deterrent for Jews, who could begin cooking the brisket 24 to 48 hours prior to Shabbat or other holidays. This version of brisket is braised in red wine, herbs, and beef stock for a deep, full-bodied flavor. 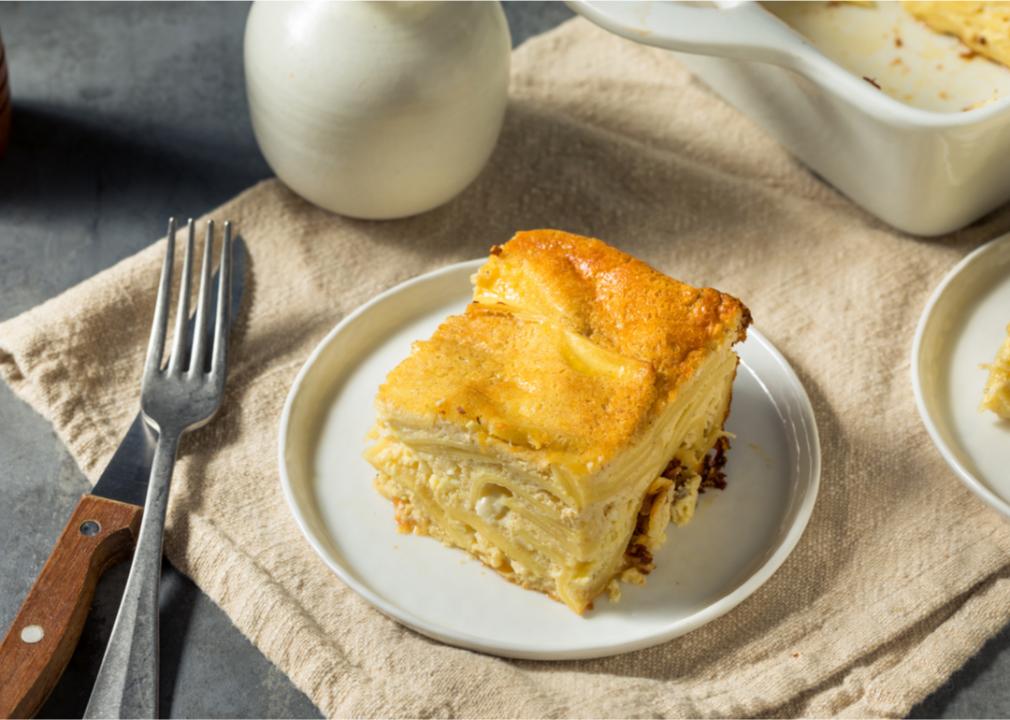 Noodle kugel, otherwise known as lokshen kugel, is a light, sweet, and dairy-filled egg noodle casserole often served on Shabbat or other holidays. Jewish food historian and recipe developer Joan Nathan writes in “The Jewish Holiday Kitchen” that lokshen kugel originated in Eastern Europe, where it was considered the “official Sabbath dessert.” It was often baked at the same time as the cholent, or Shabbat stew, which would result in a moister kugel. This noodle kugel recipe combines sugar with four types of dairy to form a basic foundational kugel; however, it can be dressed up with the addition of raisins, spices, pineapple, or any other dried fruit or nuts. 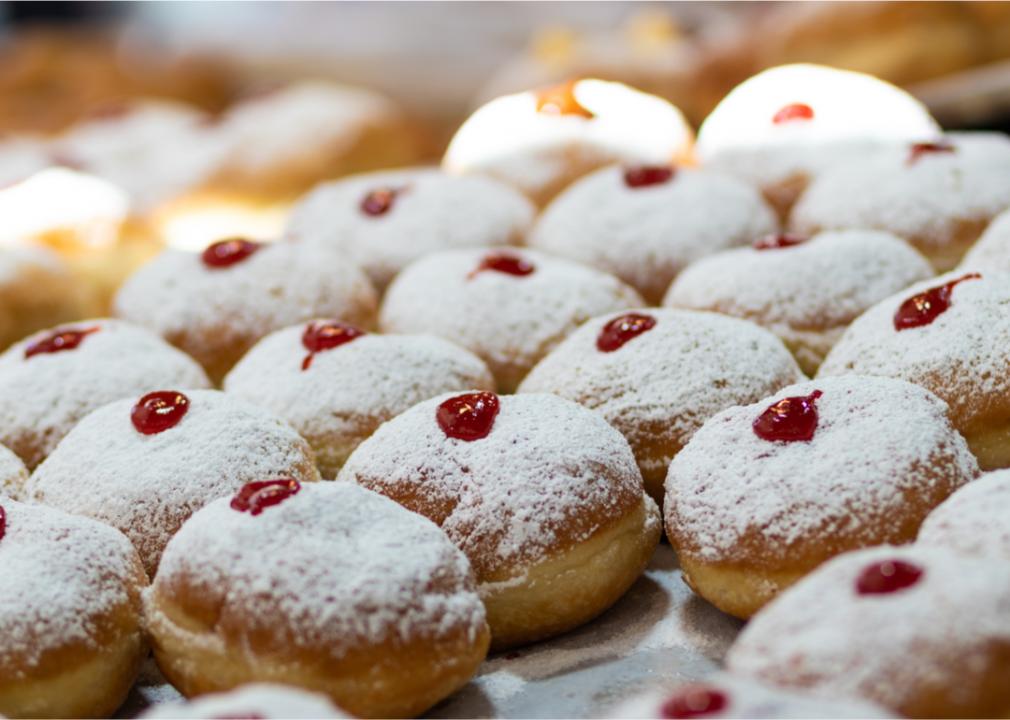 Fried foods reign supreme on Hanukkah, paying homage to the miracle of the small amount of oil that lit the ancient Temple in Jerusalem for eight days and nights. Sufganiyot, or round jelly doughnuts, emerged in 1400s Germany, and then spread to Poland and to the rest of the world, where they were designated an official food of Hanukkah in the 1920s. Making sufganiyot at home is a bit of a project, in part because of the yeasted dough, which rises overnight in the refrigerator, and partially because of the deep-frying. For the ambitious or committed doughnut lover, however, fresh sufganiyot filled with preserves or sweet cheese cannot be beat. 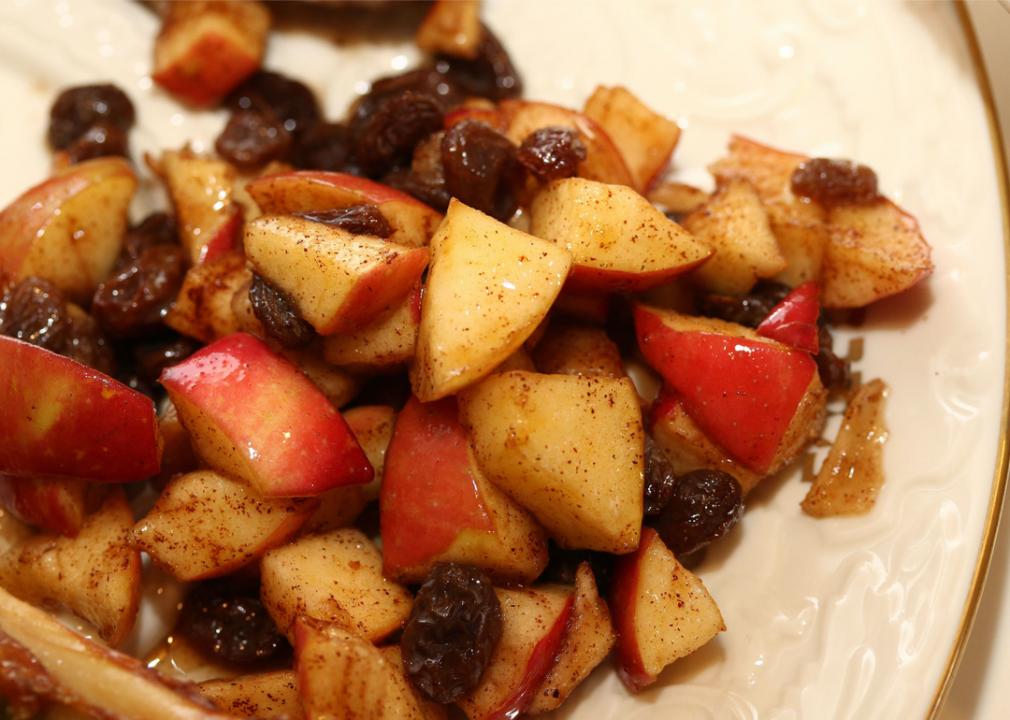 Like most of the foods on the Passover seder table, charoset is highly symbolic. The chutney-like mixture is usually comprised of fruits, nuts, spices, wine, and honey, but varies regionally. Ashkenazi Jews in the U.S. typically make an apple and walnut-based charoset, while Sephardi charoset recipes vary greatly, utilizing different combinations of dates, figs, raisins, pine nuts, citrus, and chestnut paste, depending on what is available geographically. While interpretations of the meaning of charoset vary, the condiment is generally thought to represent the mortar the Jews used to build the pharaohs’ buildings in ancient Egypt. 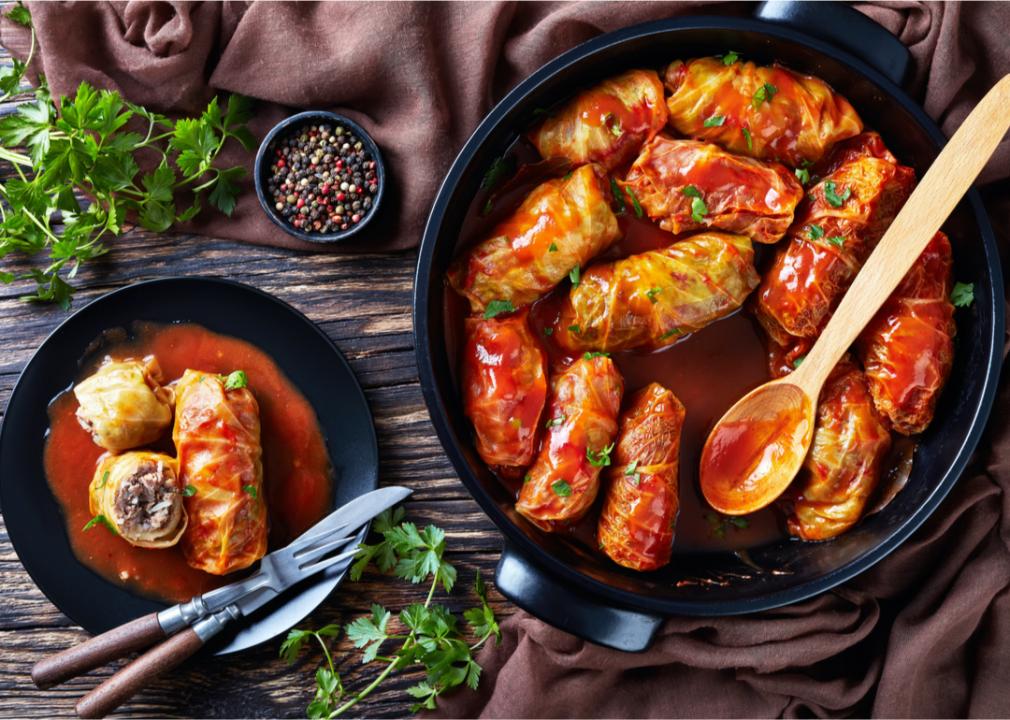 from my point of view // Shutterstock

Stuffed cabbage or vine leaves is a food that is widely dispersed across the Jewish diaspora, morphing and taking on regional and cultural variation over time. The cabbage rolls are often served on Sukkot, where stuffed foods symbolize the bounty of the autumnal harvest, and on Shavuot, the holiday which celebrates the giving of the Torah—two cabbage rolls next to each other are thought to resemble Torah scrolls. This Sephardi-style stuffed cabbage recipe includes lamb, cumin, cinnamon, almonds, and currants, and is topped with crumbled feta. 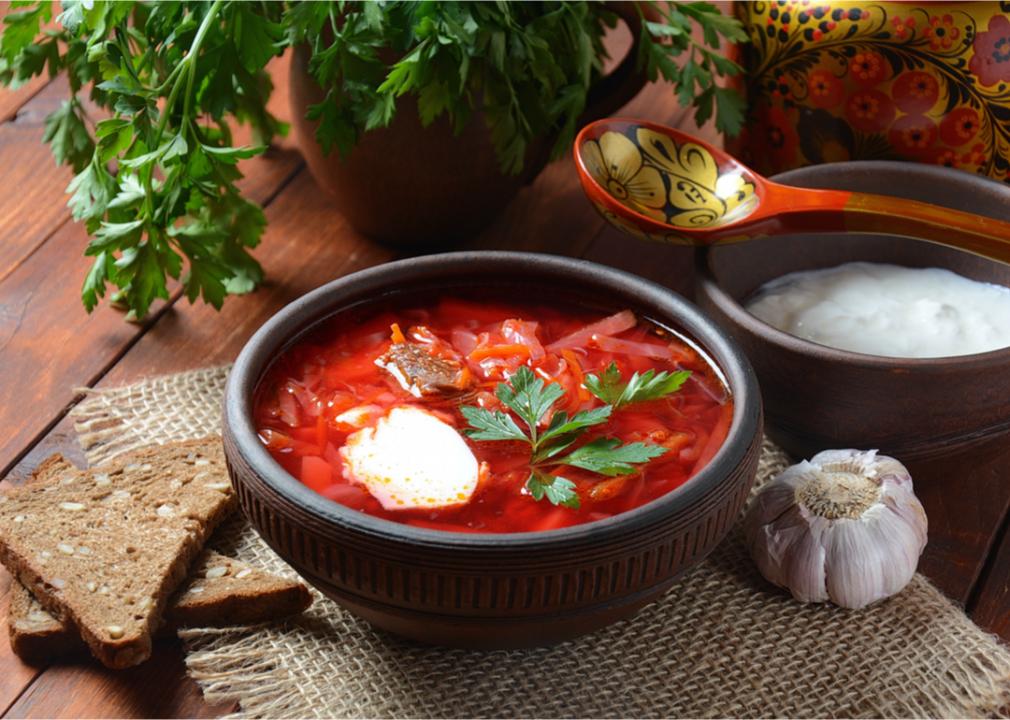 This iconic purple soup gets its vivid color from beets, and can be enjoyed either hot or chilled. Though borscht is a staple dish across Russia and Poland, it is thought to have originated in Ukraine. Borscht is not always served as a holiday dish, but often accompanies Shabbat meals, and on Shavuot, borscht is frequently garnished with a dollop of sour cream, since dairy is symbolic of the purity of the Torah. This easy, Russian-style borscht is vegetarian and very hearty, with beets, potatoes, and red cabbage. 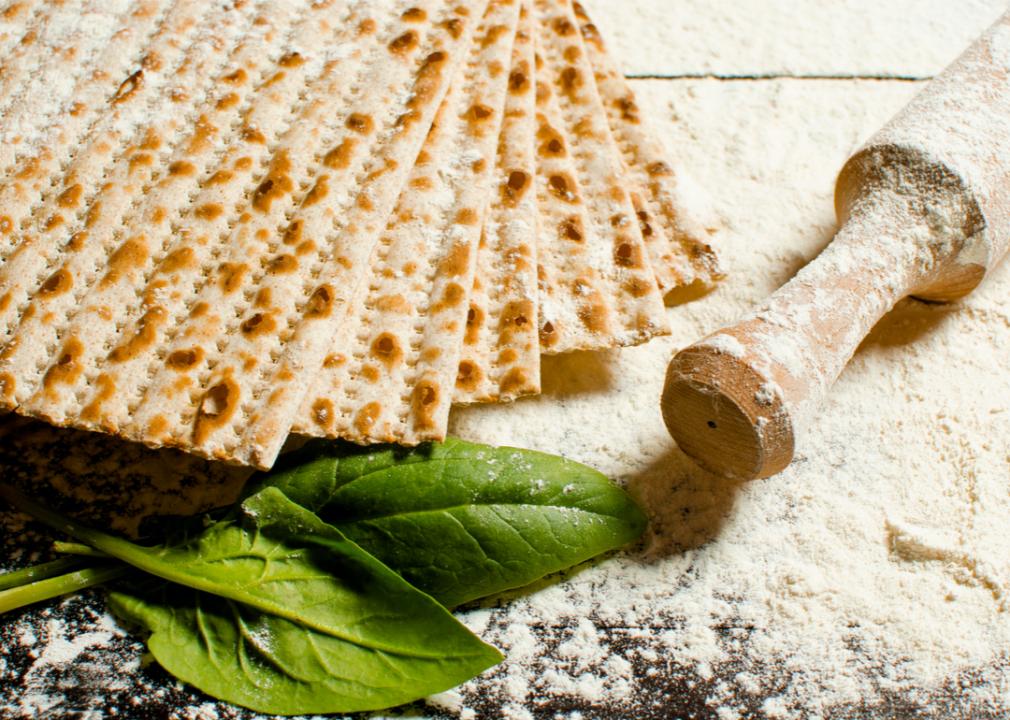 Sometimes known as the “bread of affliction,” matzo is the crunchy, unleavened foundation of the Passover table. Matzo serves as a reminder that as the Jews fled slavery in ancient Egypt, pursued by Pharaoh’s army, they did not have time to let their bread rise, and instead ate unleavened bread. Although the process of making matzo at home seems daunting, this recipe provides a simple guide which comes together in under 30 minutes and only requires flour, water, and olive oil. 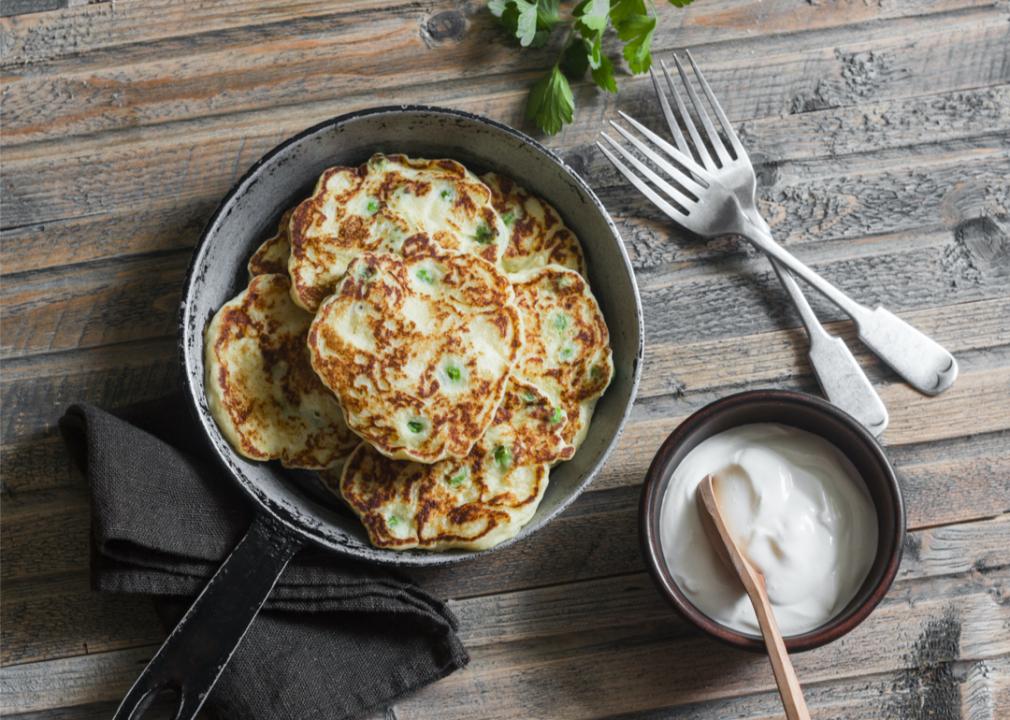 Keftes de prasa, or fried leek patties, are a Sephardic Hanukkah tradition among Jews in Turkey, Greece, Southern Europe, and the Middle East. Leeks have historically played a large part in Sephardic dishes, and spread from their native eastern Mediterranean across Eurasia with the Sephardic diaspora. Much like Ashkenazi latkes, keftes de prasa are Hanukkah favorites because they’re fried in oil. Some recipes call for potato, while others, like this one, simply require leeks as the base. 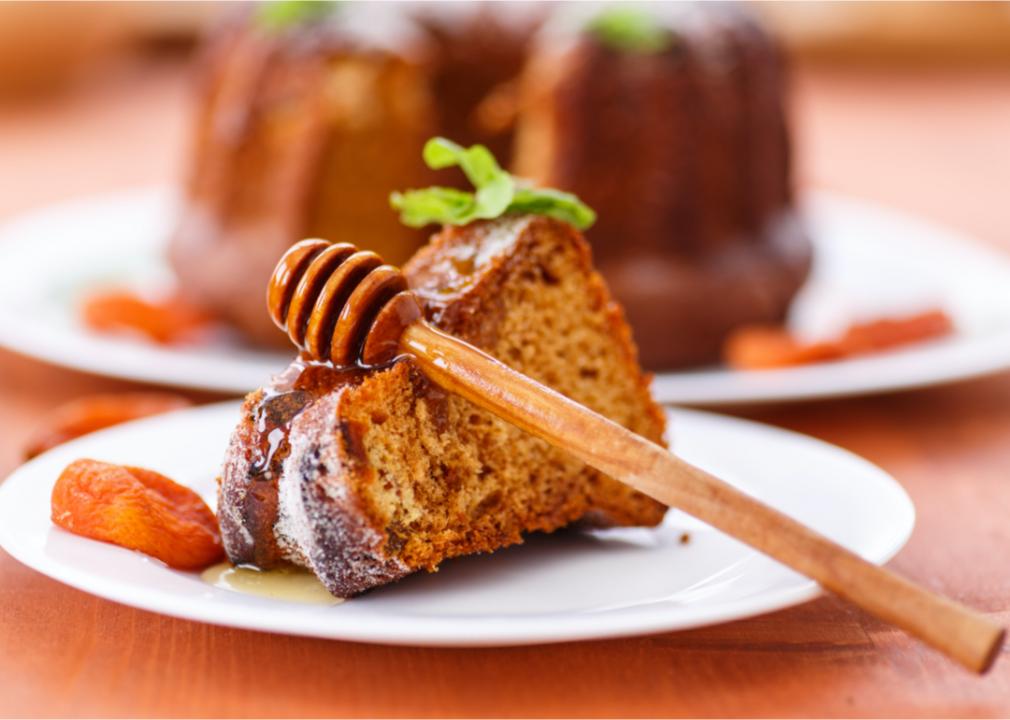 Honey cake is a dense, sweet, and spiced cake typically baked on Rosh Hashanah, or the Jewish new year. Honey is an essential component of any Rosh Hashanah celebration, as it represents hope for sweetness in the coming year. The preparation of honey cake is not complicated, but the ingredients in this recipe, such as cloves, nutmeg, orange juice, coffee, and (optional) whiskey, impart a deeply complex palate which offsets the sweetness of the honey. The cake is best enjoyed with a cup of tea or coffee and poached autumnal fruit, like apples or pears.

How to maximize days off to get the most from your …

Whether you’re training for a half-marathon or regularly find yourself pumping iron at the gym, recovery should be a part of your routine.

CrossFit gloves are an essential part of fitness training when doing CrossFit. Using them to grip and lift is helpful. Read on for the best CrossFit gloves.

Kids punching bags are an excellent tool due to their interactivity and are also a healthy method for venting their frustrations.

‘Thank you, John’: Watch a tribute to a Cleveland …

Take a walk and explore the beauty of Winter Waterfalls

Kenny’s immersed in a whole new world of Disney

‘Thank you, John’: Watch a tribute to a Cleveland …