LOS ANGELES — Janet Jackson said last month that she was postponing her “Unbreakable” tour to have an unspecified surgical procedure.

Earlier on Wednesday, reports surfaced that she would be undergoing surgery for throat cancer. 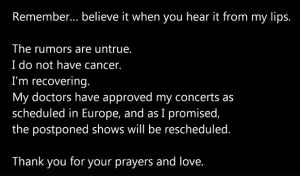 On Wednesday night, the singer released a short song and statement on social media saying that she does not have cancer and is recovering from surgery.

Back in December, the 49-year-old singer posted a message on her website and social media sites announcing that all future tour dates had been postponed until the spring.

She confirmed in the statement that her European tour dates will go on as scheduled and the rest will be rescheduled.

MEDINA, Ohio (WJW) -- The tributes are continuing to pour in for our dear friend and beloved meteorologist Dick Goddard, who passed away on Tuesday.

Honey Bee Bakery in Medina decided to remember the animal advocate by creating a special woollybear cookie in his honor.

CLEVELAND, Ohio (WJW) — The Cleveland Department of Public Health reports 26 new cases of COVID-19 in the city today. There were no fatalities from the virus, the department said.

Since the coronavirus pandemic began, there have now been 4,363 confirmed cases in Cleveland and 84 deaths from the illness.

CLEVELAND (WJW) -- For those students who will not be in traditional classrooms this fall, a growing trend is to gather groups together in private homes where they collectively study from their school district’s online curriculum.

The trend is called "pandemic pods" or "micro-schools.”