Here’s what it said:

Idk what's going on with social media but this is crazy. I'm not leaving the #Cavs

You may remember a few weeks ago, during the NBA Finals, that Smith claimed his social media had been hacked after a tweet went out from his account that said “Cavs in 7.” 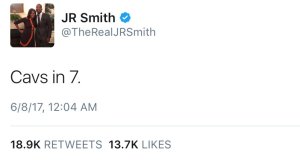 The post was up for less than 20 minutes. It was quickly deleted.

When asked about the tweet, Smith told multiple reporters he was hacked.

Looks like some password protection may be in order for Team Swish. And perhaps some oxygen for any Cleveland fans that took the post to be for real.

The company is making it available to associates in several states, including Ohio, starting this week.

JOLIET, Ill. (WGN) - A one-year-old girl died after a dog attacked her while she was in her playpen early Sunday morning.

Just before 1:30 a.m., Joliet police responded to a report of a 1-year-old bitten by a dog.

Pompeo suggested the possible move during an interview with Fox News' Laura Ingraham, adding that "we're taking this very seriously."

Mayor to address violence in Cleveland

ICE: International students must leave US or transfer if their colleges go online-only this fall