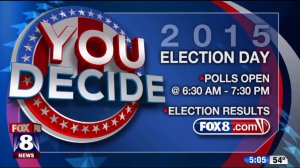 CLEVELAND –Election officials in two of Ohio’s counties say lines of voters dwindled some after an early wave of Ohioans who cast their ballots early in the state’s general election.

Ohio voters are deciding  on three statewide issues when they head to the polls.

The initiative generating the most debate is Issue 3, which would legalize marijuana in the state of Ohio.

But Issue 2 aims to prevent adding amendments to the state constitution that allow monopolies, like Issue 3.

For the first time in nearly 30 years, Akron residents will not see Don Plusquellic’s name listed for mayor. Plusquellic announced his resignation in May. Voters will chose between Democrat Daniel Horrigan, Republican Eddie Sipplen and William N. Melver.

Cuyahoga County Board of Elections spokesman Mike West said no problems had been reported at the county’s 395 polling places and absentee and early voting numbers were at expected levels. But West says a warm, sunny day could help boost turnout at the polls.

Thirty percent of registered voters in the county, which includes Cleveland, voted in the November 2013 general election.

Polls are open until  7:30 p.m. Click here to find your polling place.

Learn more about the three ballot issues below:

Issue 3: Legalizes marijuana for recreational and medicinal use

FOX 8 News will have Election Day results on our website starting at around 7:30 p.m.

You can also watch FOX 8 News at 10 for more on the big races.

Ohio State swimmer makes men’s Olympic team; first to do so in 65 years

Hunter Armstrong, a member of the OSU’s men’s swimming team, has been named to the U.S. Olympic swimming team.

CLEVELAND (WJW) -- COVID-19 cases, hospitalizations and deaths have dropped significantly in the past few months. But new variants of the virus are worrying to medical experts like University Hospitals and Rainbow Babies & Children Director of Infectious Disease Dr. Claudia Hoyen.

"With COVID, that's kind of how it is. We're living minute by minute, day by day...Every day we see new variants popping up from you know, around the country, around the world," said Hoyen.

(WJW) — Americans love their fireworks. And this Fourth of July, as many professional displays were put on hold in 2020 due to the pandemic, the big booms are once again headed back to Northeast Ohio.

Looking to purchase a home? Experts urge buyers to do these 3 things before placing an offer

Power restored to most Ohioans after thousands reported outages Sunday

Officials determine cause of fire at St. Rocco in Cleveland; $25K damage

Official: Crash, ‘likely’ due to storm, kills 10, including 9 children in Alabama

Cleveland and Akron zoos say, ‘Thank you’ to dads with free admission all day

Ohio Vax-a-Million: Tonight is your last chance to sign up for final drawing