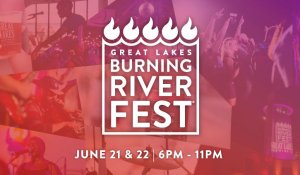 CLEVELAND — The 18th Burning River Fest kicks off this weekend.

The beer and music festival will be June 21 and June 22 at the former U.S. Coast Guard Station near Wendy Park in Cleveland Metroparks Lakefront Reservation.

This year is the 50th anniversary of the historic Cuyahoga River fire that sparked a movement around protecting the areas waterways. The Burning River Fest is presented in partnership with the Cleveland Metroparks as part of Cleveland’s Cuyahoga50 programming.

A diverse mix of artists and genres will be represented on Burning River Fest’s two stages, including stripped down sets with sunset views on the Acoustic Stage. The fest’s popular Silent Disco returns to the PNC Boathouse, with rotating sets from DJ Red I, Candi Fresca, and DJ MIMO all weekend long.

All Burning River Fest proceeds benefit the Burning River Foundation, a local non-profit dedicated to protecting our freshwater resources, which has raised over $750,000 to date.

Funds from this year’s fest will benefit environmental education at the historic Coast Guard Station.

TICKETS: Tickets are available at burningriverfest.com.

CHESTER TOWNSHIP, Ohio (WJW) - Heavy snow continues to fall but the Ohio Department of Transportation has been working around the clock to keep our roads as clear as possible.

It was a snowy Sunday throughout Northeast Ohio. The Eastside saw their fair share of snow like in Chester Township. And over in Parma they had a rain snow mix with reports of thundersnow.

NASHVILLE, Tenn. (WKRN) – A Spirit Airlines passenger who assaulted multiple flight attendants, punching one and pulling another’s hair, was restrained by others on board with zip-ties and charged with public intoxication Saturday, according to an arrest affidavit.

Police received a call Saturday evening around 7 p.m. from the airline regarding a disruptive passenger on a flight arriving at Nashville BNA International Airport. Upon arriving at the gate, Spirit Airlines’ flight crew informed officers that a female passenger had punched a flight attendant and pulled another’s hair.

THE HAGUE, Netherlands (AP) — Cases of the omicron variant of the coronavirus popped up in countries on opposite sides of the world Sunday and many governments rushed to close their borders even as scientists cautioned that it's not clear if the new variant is more alarming than other versions of the virus.

Josh Duggar trial: A timeline of events and everything to know

Can you trust at-home COVID tests?

How long you can eat Thanksgiving leftovers

Man taken to hospital for gunshot wound after being carjacked, Cleveland police report