CLEVELAND – An in-house staff writer for the Trump organization has released a statement on Melania Trump’s Monday night speech at the Republican National Convention.

After the speech, it was noted that  a couple of passages repeated word-for-word parts of Michelle Obama’s speech to the Democratic National Convention eight years ago.

Meredith McIver had this to say in a letter released Wednesday afternoon: 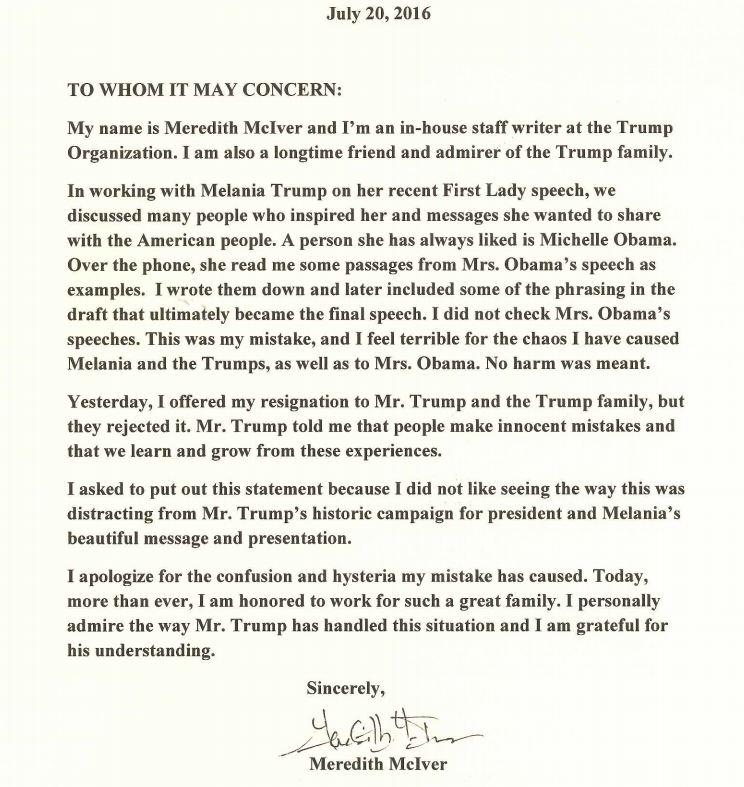 Trump’s campaign chairman insisted that the issue had been “totally blown out of proportion.” They also said on Tuesday that no one would be fired  or disciplined for the writing.

Officers lost in the line of duty remembered during Cleveland ceremony

CLEVELAND (WJW)-- Police officers who gave their life while protecting the public were honored Monday night in downtown Cleveland.

PACIFICA, Calif. (KRON) - The father of two young children found dead in his Nebraska home was arrested in California over the weekend.

WALDORF, Md. (AP) — A spokeswoman for a Maryland sheriff's office says two of its deputies were shot and wounded while trying to serve a warrant.

Charles County Sheriff's Office spokeswoman Diane Richardson says deputies responded to a call from a home in Waldorf about a man who the caller wanted out of the house.

OSHP: Drugs, alcohol may have been a factor in Wayne County crash that killed 1, hospitalized another

Defendant kills himself in courtroom after hearing verdict

New dog collar claims to help owners communicate with their pets: FOX 8 put it to the test

‘Somebody’s going to lose their life over a car’: Search for violent carjacking suspects continues

‘So I raped you.’ Facebook message renews victim’s fight for an arrest