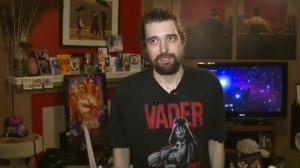 Daniel Fleetwood, a “Star Wars” fan whose dying wish was to see the upcoming movie, died this week.

“He is now one with God and with the Force,” his wife, Ashley Fleetwood, wrote on her Facebook page Tuesday. He died in his sleep and in peace, she posted.

Fleetwood, a 32-year-old “Star Wars” aficionado who had terminal cancer, got the chance to see an unedited version of “Star Wars: The Force Awakens” on Thursday, a Disney representative confirmed.

All involved were happy to make it happen, the rep said.

Fleetwood had spindle cell sarcoma, a rare form of connective tissue cancer, and was told in July that he had two months to live, according to CNN affiliate KPRC.

A “Star Wars” fan from childhood, he wanted to see the new film before he died.

The movie will be released to the public December 18.

Hamill congratulated Fleetwood and his wife after she posted the news of the screening on her Facebook page.

Man accused of stealing $1.7M from woman with dementia by posing as son

NASHVILLE, Tenn. (WKRN) — A couple from Franklin, Tennessee, has been charged in an elaborate scheme to defraud an elderly widow with dementia out of $1.7 million, according to federal investigators.

The Acting U.S. Attorney for the Middle District of Tennessee said Karl Hampton, 63, and his 59-year-old wife, Deborah Hampton, were arrested Wednesday morning by the Federal Bureau of Investigation.

CLEVELAND (WJW) – The Cuyahoga County prosecutor would like a new set of eyes on one of Cleveland’s most notorious unsolved mysteries, the murder of Aliza Sherman.

Sherman was stabbed 11 times in broad daylight on March 24, 2013, when she was just a few steps from her attorney’s office. Police believe the suspect was caught on video running from the scene. Her killer still remains free. No arrests have been made on the case.

Willoughby man charged with murder in death of infant son

WILLOUGHBY, Ohio (WJW)-- A Willoughby man was arrested on Tuesday in the 2020 death of his 3-week-old son.

William L. Beasley, 30, was charged with murder, involuntary manslaughter, reckless homicide, endangering children and felonious assault. He was taken to the Lake County Jail and will be arraigned on Friday.

2-year-old shoots both parents after finding gun in home

COVID vaccine freebies: Companies offer rewards, incentives to those who get the shot

Gas shortage in Ohio? Experts say there’s nothing to worry about

‘Amazing’: No one hurt after 2 planes collide in midair over Colorado

Another cold one! Frost Advisory issued for Northeast Ohio