WARREN – The Fox 8 I-Team has obtained a disciplinary letter showing a Warren city worker has been fired after the director of public service and safety found her guilty of an administrative charge of theft.

According to the letter, the employee Kisha Jackson, was “discharged from employment” on March 3. 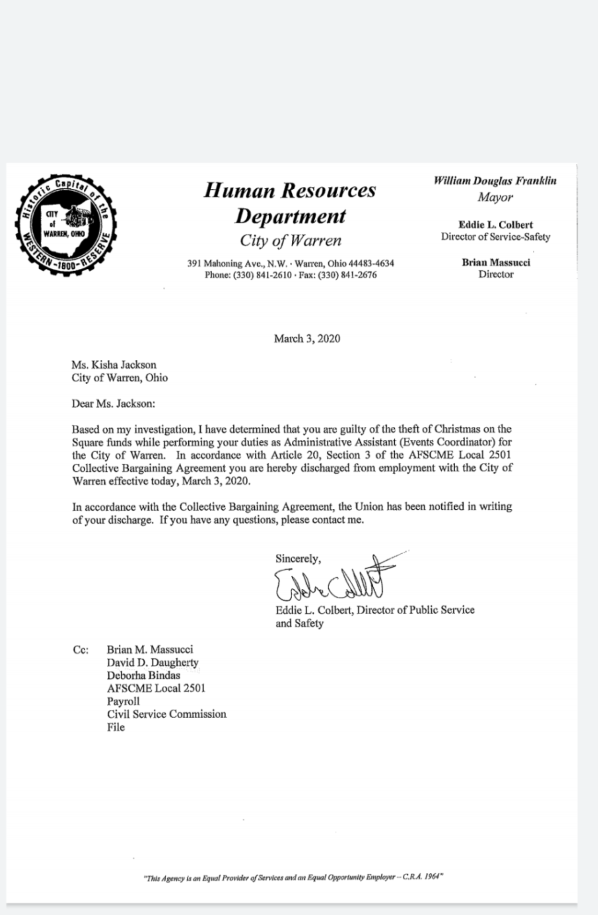 The letter is signed by Eddie Colbert, Warren’s Director of Public Service and Safety.

“Based on my investigation, I have determined that you are guilty of the theft of Christmas on the Square funds while performing your duties as Administrative Assistant (events coordinator) for the City of Warren,” the letter states.

The letter does not state how much money was allegedly taken or if Jackson faces criminal charges.

We did try reaching officials with the union that represents Jackson as well as her attorney, but have not yet received a response.

CLEVELAND (WJW) — The FOX 8 I-Team is investigating secrets surrounding the closing of the I-X Center, a complex owned by the city of Cleveland where so many people in Northeast Ohio have gone for shows and carnivals over decades.

The I-Team asked for internal emails about the I-X Center. But, City Hall sent countless pages of records hidden by black boxes.

Editor's Note: Click here for previous coverage on this story.

CLEVELAND HEIGHTS, Ohio (WJW) - Cleveland Heights police say they have arrested and charged two suspects they believe were involved in a violent robbery last Monday at the Sunoco gas station on Cedar Rd.

I-TEAM: Sex offenders released due to COVID-19 have been ordered back to Cuyahoga County Jail

CLEVELAND, Ohio (WJW) - The FOX 8 I-TEAM has learned a judge is ordering a Northeast Ohio minister convicted of sex crimes back to the Cuyahoga County Jail weeks after he’d been released due to concerns about COVID-19.

A woman convicted in the same case had also been released, and she also now has been ordered to report back to jail.