CLEVELAND — The FOX 8 I-Team has learned the head of the Cleveland Police Commission has been placed on leave for a “thorough investigation” that revolves around “workplace issue and conflicts, including your performance.”

Cleveland City Hall placed Executive Director Jason Goodrick on paid administrative leave Friday.  The I-Team has obtained a copy of a letter to him outlining that from the City Finance Director.

**See letter below this story**

“Over the past several months, the Cleveland CPC staff has raised concerns to Commissioners about work environment. The Commission reached out to the City of Cleveland’s Human Resource Department for assistance with conducting an independent investigation.

As a place to start, the Executive Director of the Cleveland Community Police
Commission has been placed on a non-punitive administrative leave. The
Executive Director’s paid leave will allow time for the Commission and the City to
investigate concerns expressed by some of the Staff about the nature of the
workplace environment. In the meantime, the work of the Commission will continue
uninterrupted.

We have no further statements related to the actions of the City’s Human
Resource Department.”

The Commission makes recommendations on policies and procedures for reform of the Cleveland Police Department. The Commission is made up of 13 members who volunteer although the Commission has paid staff members. A news release from last year shows Goodrick began work as Executive Director in June with a salary of $90,000.

The letter placing Goodrick on leave also notes, “you have also expressed discomfort and dissatisfaction with the current work environment.” The letter also states the paid leave will be for four weeks, but that could be extended.

The I-Team has left messages for Goodrick.

A Commission member and two city officials have confirmed to the I-Team ongoing concerns about the internal functioning of the Commission.

The ITEAM did speak with Lee Fisher, a member of the Commission, who told them that:

The Executive Director’s paid leave will allow some time for the Commission and the City to investigate some concerns expressed by some of the staff about the nature of the workplace environment. In the meantime, the work of the Commission will continue uninterrupted. Beyond that, I refer you to our Co-Chairs, LaToya Logan and Rev. Yvonne Conner.

“I am not aware but as per the consent decree the CPC is separate and you should check with them.”

A woman previously selected to head the Commission was indicted for filing false moving expenses. Nicole Junior recently struck a plea deal with Cuyahoga County Prosecutors and received probation and a fine. 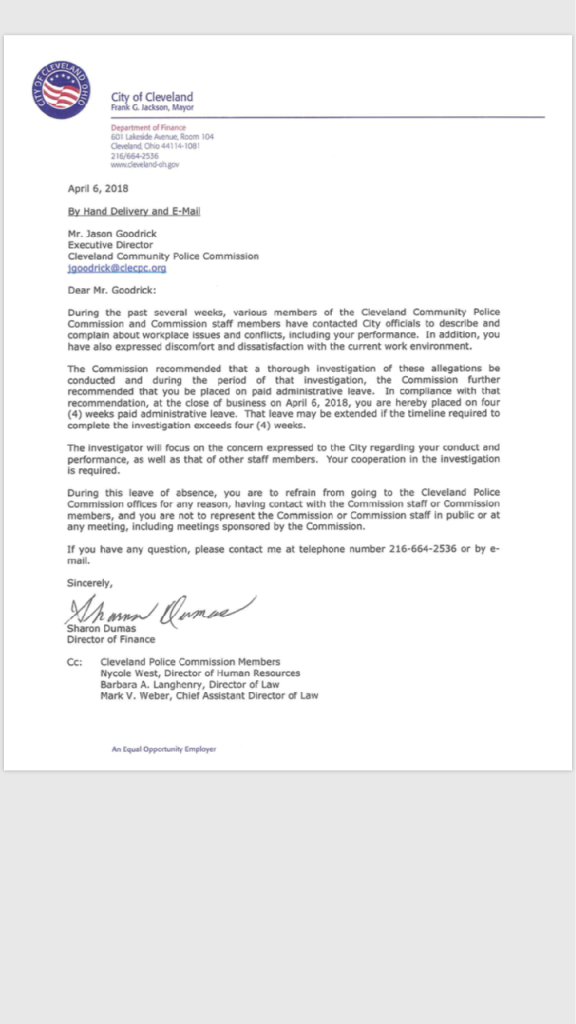 WASHINGTON (AP) — The Biden administration is privately weighing how to handle the upcoming verdict in the trial of former Minneapolis Police Officer Derek Chauvin, including considering whether President Joe Biden should address the nation and dispatching specially trained community facilitators from the Justice Department, aides and officials told The Associated Press.

Closing arguments began Monday in Chauvin’s trial with a prosecutor telling jurors that the officer “had to know” he was squeezing the life out of George Floyd as he cried over and over that he couldn’t breathe and finally fell silent. Chauvin faces murder and manslaughter charges.

LONDON (AP) — Now that the Royal Family has said farewell to Prince Philip, attention will turn to Queen Elizabeth II’s 95th birthday on Wednesday and, in coming months, the celebrations marking her 70 years on the throne.

This combination of events is reminding the United Kingdom that the reign of the queen, the only monarch most of her subjects have ever known, is finite. That has triggered speculation about how long she will remain on the throne, what the monarchy will look like in the future and, for some, even whether it should continue to exist.

TUSCARAWAS COUNTY, Ohio (WCMH) -- An Ohio Department of Transportation (ODOT) pickup truck was struck by a vehicle Monday morning in a work zone in Tuscarawas County.