CLEVELAND, Ohio –  A father spoke with Fox 8 on Thursday, explaining what caused him to lunge at his daughter’s killer while in court.

The Cuyahoga County Prosecutor’s Office is looking into whether or not to file charges against Terry.

Terry was one of the family members who chose to speak after the judge sentenced Madison to death for killing his daughter and two other women.

“He looked at me and smiled,” Terry said. “I thought that was so disrespectful.”

“I was thinking how he mutilated my child, cut my child. You did all this while my child was still alive, so you caused my baby great pain. I don`t know if I thought about leaping or what have you, I just know I wanted him.”

Terry said that if he does get charged, he is okay with it because he thinks he did the right thing.

The judge followed a jury’s recommendation that Madison should be executed for aggravated murder and kidnapping. The judge could have chosen life in prison with no chance of parole.

A jury convicted Madison last month, then deliberated for less than a day before recommending the death penalty. 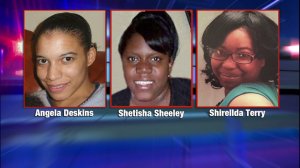 Madison, who has said he admired serial killerAnthony Sowell, killed Shirellda Terry, Angela Deskins and Shetisha Sheely. Their bodies were found in plastic bags near Madison’s East Cleveland home back in 2013.

During his trial, Madison’s lawyers did not argue that he didn’t kill the women, only that their murders weren’t premeditated. They were trying to spare him the death penalty.