The Browns will open the 2018 season at FirstEnergy Stadium against the rival Steelers for a second straight year.

Here is the schedule: 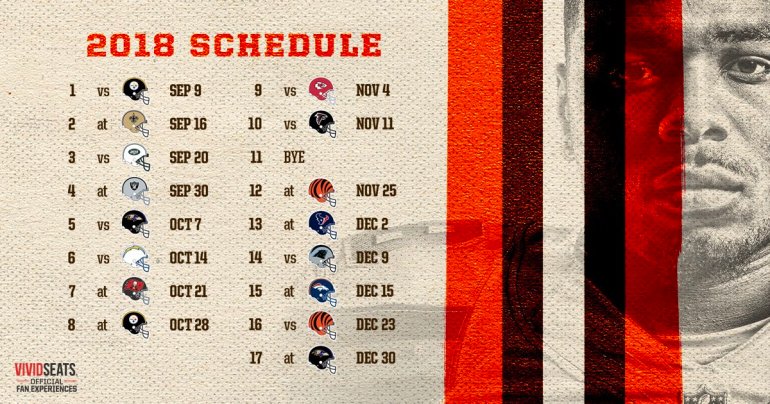 The Browns say season tickets are now available by calling (440) 824-3434 or toll free at (888) 891-1999 or online at clevelandbrowns.com/tickets. Single-game tickets will be available this summer; you can sign up for pre-sale, here.

We are one week away from the NFL Draft.  It is by far the most important draft for Cleveland in a long time and with a week to go, the Browns are not saying a word. They are expected to draft a quarterback with the first overall pick.

**The draft will air on FOX 8 News. Stay tuned for complete LIVE coverage on-air and online**

**More stories on the Cleveland Browns**

Our 2018 schedule has arrived.

Ohio vaccine lottery: Who is eligible for the weekly $1 million, scholarship prizes — and what do they need to do?

As part of the program, on Thursday the first “Discovery Flights” took off from the T&G Flying Club at the Cuyahoga County Airport in Richmond Heights.

CLEVELAND (WJW) -- The Cleveland Browns are set to host their class of rookies this weekend in Berea. This includes draft picks and undrafted free agents.

Three of those draftees got the business side of things done on Thursday and signed their rookie contracts.

PROVIDENCE, R.I. (AP) — Nine people were wounded Thursday evening in Rhode Island's capital in what police there believe to be the largest shooting in city history.

Of the nine, three had serious injuries and were “maybe critical," Providence Police Chief Col. Hugh T. Clements told reporters at the scene.

Obligation for Catholics in Ohio to attend mass on Sundays, Holy Days to resume

‘Little Giants’ fight back against gun violence in Northeast Ohio

CDC: People who are vaccinated do not need to wear masks inside in most places

Obligation for Catholics in Ohio to attend mass on Sundays, Holy Days to resume