ASHTABULA, Ohio– Friends and family members of a young mother who was found dead in July are holding a fundraiser Saturday . 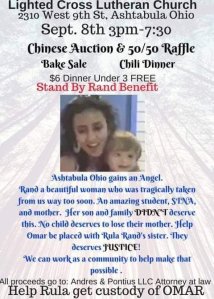 Kat Loveland of Ashtabula is working with Rand Al Dulaimi’s family and holding a fundraiser to raise money to pay attorneys to help Rand’s sister get custody of her young son.

The fundraiser is from 3 to 7:30 Saturday at Lighted Cross Lutheran Church in Ashtabula.

Al Dulaimi’s body was found in July a few weeks after she was reported missing. She leaves behind a young son, Omar.

Sheriff Bill Johnson says her estranged husband, Jeffrey Stanley ,is a person of interest in her disappearance and death .

He has not been charged in connection with her death. He is facing unrelated child pornography charges in federal court.

Al-Dulaimi’s family lives overseas. Her sister has been trying to get to the United States.

Continuing coverage on this story, here.

BUFFALO, N.Y. (CNN) -- When Antonio Gwynn Jr. saw the damage from protests in his hometown of Buffalo, New York, he grabbed a broom, bought some trash bags and started cleaning the streets by himself.

He started at 2 a.m. on Monday and did not stop cleaning for the next 10 hours. When an organized group of neighbors arrived later that morning to start clearing the damage, they found that Gwynn had already done most of the work.

FAIRPORT HARBOR, Ohio (WJW) -- The Coast Guard confirms the bodies of a father and son who went missing this week on Lake Erie have been found.

According to officials, the 41-year-old man and his 13-year-old son went fishing on Wednesday and hadn't been seen since.

TAMPA, Florida (WJW) — One mother has an action-packed birth story to tell.

Florida troopers helped a woman deliver her baby girl in a car on the side of the road in Tampa yesterday. During the birth, troopers held up raincoats over the car to shield the event from passersby.

Akron mayor kneels with police and protesters during rally

Tracking the Tropics: Tropical Storm Cristobal strengthening as it moves toward Louisiana

Animal Planet star branches out to Gatlinburg to build 8 treehouses