Skip to content
Breaking News
Breaking News
Snow emergencies issued for multiple Northeast Ohio counties
Watch Now
Watch Now
FOX 8 News at 4,5,6 and 7
This is an archived article and the information in the article may be outdated. Please look at the time stamp on the story to see when it was last updated. 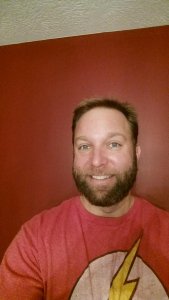 This updated picture is brought to you by the Browns loss to the Titans by a score of 26-28.

Here were his thoughts before the Tennessee game:

LIVE on #Periscope: Will today be the day I shave my beard? Browns need to win! 7-6 end of 1st https://t.co/NJmJc9sUNs

Watch and read about the evolution of this beard-growing season for Scott:

CLEVELAND, Ohio -- Scott Sabol's beard is back -- which means someone must need some luck.

It's the Cleveland Browns...

Scott's superstitions have pushed him to grow his beard out many times over the years.

One winter, he vowed not to shave until the temperature wen

Last year he vowed to keep his beard growing as long as the Cleveland Cavaliers kept winning. (They obviously did).

Now, he's holding out for a Browns win. He's been growing it out for three weeks -- and he'll continue growing it until their first win.

If that never happens, he said he'll grow it out through the end of the season.

If he ties his current 74-day record, he won't have to shave until Nov. 21. But hopefully, Browns fans won't have to wait that long.

What you can do now to prepare for coronavirus

DeWine said the threat of coronavirus in Ohio remains low and there are no confirmed cases in the state.

CLEVELAND (WJW) -- A magistrate ordered a Strongsville priest to be held without bond after he was charged with several federal counts related to child pornography.

Bond prices soared again as investors sought safe places to park money, sending the yield on the 10-year Treasury to another record low.

What you can do now to prepare for coronavirus