CLEVELAND– We’d like to introduce you to a special child with a very special wish and thanks to a local organization and the Cleveland Division of Police, this little boy’s dream will come true on Thursday.

CJ DeJohn is 6 years old and when he grows up, he wants to be a police officer. The kindergartner was born with a rare congenital heart condition that occurs in approximately one in 5,000 babies.

Basically, he has half a heart.

“I actually didn’t get to hold him until he was a few days old. And his first open heart surgery was at five days old,” his mother Whitney DeJohn said.

He had another heart surgery at six months old. His parents were anxious and afraid.

“During the third open heart surgery, he actually had a stroke during the surgery. Subsequent seizures during that. He was paralyzed on his left side,” CJ’s mom said.

His recovery hasn’t been easy.

“He’s frustrated that he can’t run as fast as the other kids,” Carl DeJohn told FOX 8 News.

Cleveland-based A Special Wish Foundation, which grants wishes for children with life-threatening illnesses, has joined forces with Cleveland police and FOX 8 News to make CJ police chief for a day.

He’ll ride in a police car, meet the SWAT team and even solve a crime.

“We’re not sure if he can actually be a police officer with his heart condition so that’s why we think it’s a really special thing,” Whitney DeJohn said. 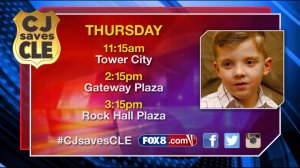 You can keep tabs on CJ’s Special Wish by following us on Twitter and Instagram, and using the hashtag #CJSavesCLE

What we know about the Highland Park shooting suspect

What we know about the Highland Park shooting suspect

Want to light off fireworks in Northeast Ohio?

Biden: Feds will assist with hunt for July 4 shooter

Protests continue in Akron in wake of Jayland Walker …

Want to light off fireworks in Northeast Ohio? Not …

Want to light off fireworks in Northeast Ohio?

Biden: Feds will assist with hunt for July 4 shooter

Retailers to pay you to keep returned items