Skip to content
Close
Thank you for subscribing to the daily FOX 8 news updates where we bring you the top stories locally and nationally of the day right to your inbox.

PIKE COUNTY, Ohio — Four family members have been arrested in the murders of eight people in Pike County in April 2016.

Seven adults and a teenage boy from the Rhoden family were found shot to death at four homes near Piketon in southern Ohio on April 22, 2016. 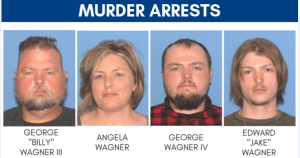 The following four members of the Wagner family, of South Webster, were taken into custody Tuesday afternoon and are charged with planning and carrying out the murders:

Authorities in the past have said they suspected multiple attackers who were familiar with the victims’ homes and the surrounding area about 70 miles south of Columbus. The motive remains a mystery.

DeWine’s office has said one of the victims, Christopher Rhoden Sr., had “a large-scale marijuana growing operation,” leading some to speculate the killings were drug-related or even connected to Mexican drug cartels.

The last victim to be discovered, 44-year-old Kenneth Rhoden, who was the brother of Christopher Rhoden Sr., died of a single gunshot. Three children were found unharmed.

More details about the investigation and arrests will be released to members of the media at the news conference.

CLEVELAND (WJW) -- Former First Lady Michelle Obama is helping to bring hundreds of thousands of meals to families all over the country including to Cleveland.

Obama on Monday announced, as part of the Pass the Love with Waffles + Mochi campaign, Cleveland and Atlanta are the first partner cities to receive meals.

CLEVELAND (WJW) It is definitely an interesting choice of income in the pandemic. With millions of Americans unemployed, more and more people are turning to a social media platform that allows them to sell sometimes explicit photos of themselves.

"I initially started doing this as a way to make a little bit of side money," said Tiffany Mick, OnlyFans creator.

**Watch the video, above, for more on the Pfizer vaccine now authorized for those 12 to 15 years old.

(NEXSTAR) – A 23-year-old woman is recovering after she was given six shots of the Pfizer BioNTech COVID-19 vaccine at a hospital in Tuscany, Italy.

IRS has $1.3 billion in unclaimed tax refunds… there’s one week left to claim them

Police searching for killer of man shot in head while sitting on bench at Akron’s Grace Park: ‘That person is very brazen’

High school senior receives $1.6 million in scholarships after being accepted to 40 colleges

FOX 8 looks back at past St. Jude Dream Home winners in Northeast Ohio

California governor proposes tax rebates of up to $1,100