PARKLAND, Fla. -- Nikolas Cruz made a brief appearance in court for a procedural matter Monday, shortly after a law enforcement source told CNN that the 19-year-old school shooter obtained 10 rifles in the last year or so.

Cruz purchased two weapons from Gun World of South Florida in Deerfield Beach, said Kim Waltuch, the store's CEO. She would not provide details on the types of guns he purchased or on the time frame, but said the sales followed normal protocol for Florida firearms purchases.

As investigators work to track Cruz's other gun purchases, students and staff at Marjory Stoneman Douglas High School say they're determined to ensure that the deaths of their 17 classmates and teachers bring change. They've promised action in the wake of the massacre, and they're headed to Tallahassee, Florida, to speak to legislators about school safety and gun control this week. They have school walkouts and a march scheduled in the coming weeks.

Meanwhile, Anthony Borges, 15, continued his recovery. He's one of four patients who remain hospitalized after Wednesday's massacre in Parkland, Florida. He was shot five times, according to the Broward County Sheriff's Office.

On Sunday, the teen remained in a bed, his face swollen and his body tethered to IV and oxygen tubes.

"Fortunately, he is recovering -- but has a long road ahead with more surgeries needed," according to a Broward County Sheriff's Office Facebook post.

Anthony helped protect his classmates, closing and locking a door to a classroom, according to a verified GoFundMe account that, as of late Monday morning, had raised almost 25 times its stated goal of $5,000. As Anthony blocked the door, Cruz fired through it, hitting Anthony in the back and in both legs, shattering his thigh bone, according to the account's description.

Details on shooters' behavior: A 2016 Florida Department of Children and Families says that following a breakup with a girlfriend, Cruz began cutting his arms. He also announced plans to buy a gun, put racial slurs and hate symbols on his backpack and suffered from depression, attention deficit hyperactivity disorder and autism, the report said. Despite Cruz's behavior, the report concluded the "final level of risk is low."

Cubs star speaks out: Marjory Stoneman Douglas alum and Chicago Cubs first baseman Anthony Rizzo said during a news conference that he had visited kids in the hospital after the shooting. He also issued a call for change, saying, "No one right now feels comfortable on a daily basis sending their kid to school not knowing if they're going to see them again."

Host family saw no clues: Kim and James Snead, who took in Cruz after his adoptive mother died in November, tell ABC's "Good Morning America" that Cruz was polite and "seemed normal." Despite reports of what authorities say was a "disturbing" social media footprint, James Snead said, "We knew he had one Instagram account ... The other ones he had, we had no idea about."

Funerals scheduled for this week: Among those being laid to rest this week are Alaina Petty, 14, and Luke Hoyer, 15, whose services were held Monday morning, and Cara Loughran, 14, whose service is Tuesday. Cara's aunt, Lindsay Fontana, said on Facebook the day after the shooting that her niece was an "excellent student" who loved the beach. Alaina's family described her as a "vibrant and determined young woman" who volunteered in cleanup and rebuilding efforts after Hurricane Irma. 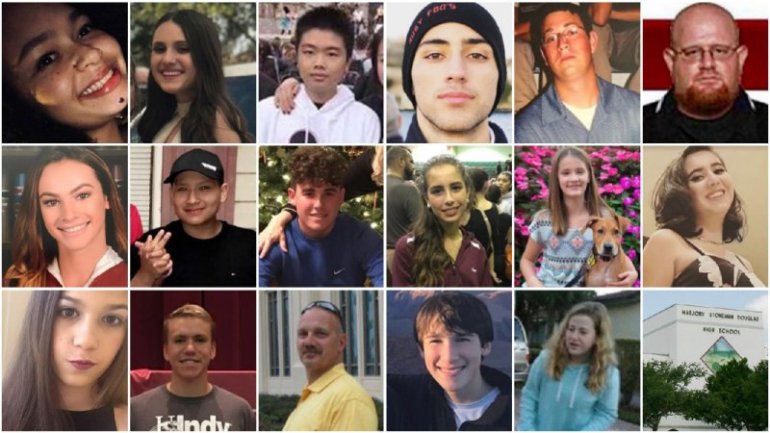 In the aftermath of the shooting, many students who survived the bloodshed say they can no longer endure inaction on the issue of gun control. Just days after surviving the ninth-deadliest shooting in modern US history, several students have given powerful speeches and compelling TV interviews, voicing their desire to break the loop of massacres.

Some have gone on social media, vocal about what they experienced and what action they want to see from those in power. They're demanding that state and federal lawmakers step up and do something.

They're also coming for the National Rifle Association and any politician who takes money from the powerful gun lobby. The NRA did not return CNN's call seeking comment.

"My message for the people in office is: You're either with us or against us. We are losing our lives while the adults are playing around," said junior Cameron Kasky, announcing a March 24 demonstration in Washington.

They plan to converge at the nation's capital next month and have asked supporters who can't make it to stage marches in their own communities, according to a mission statement for March For Our Lives.

In Washington on Monday, teen demonstrators lay on the ground in front of the White House in solidarity with the 17 victims. Others carried flags and posters.

Parkland students are planning a trip to Tallahassee, during which they hope to have sit-downs with state legislators. About a hundred people, students and chaperones, are set to arrive at the Capitol on Wednesday.

Marjory Stoneman Douglas remains closed through Wednesday, and officials say they hope to reopen the doors by week's end. It's not clear when students will return.

The school district has also proposed tearing down the building where the shooting happened, Parkland Mayor Christine Hunschofsky said.

As the investigation into the shooting continues, a review has been ordered by Attorney General Jeff Sessions into how a tip to the FBI about Cruz was missed and how the agency responds to indications of potential violence.

The FBI failed to act on a January 5 tip about "Cruz's gun ownership, desire to kill people, erratic behavior and disturbing social media posts, as well as the potential of him conducting a school shooting," the agency said.

The proper protocols weren't followed and the FBI's Miami office was not notified, the agency said.

A video blogger also said he warned the FBI in September about a possible school shooting threat from a YouTube user with the same name as Cruz. The FBI did not find information to identify the person, said Robert Lasky, FBI special agent in charge of the Miami division.

On Monday, a law enforcement source briefed on the investigation told CNN that Cruz had obtained at least 10 firearms, all of them rifles. Investigators are trying to track the purchases, which Cruz appears to have made in the past year or so, the source said.

Also Monday, CNN obtained a 2016 report from the Florida Department of Children and Families that said Cruz engaged in self-destructive behavior after a breakup with a girlfriend.

DCF spoke with the teen's now-deceased mother, Lynda Cruz, who told them he suffered from depression, ADHD and autism. After the breakup, she said, he began cutting his arms and posting it to Snapchat. Previously, Cruz had put a Nazi symbol on his backpack, and "had hate signs on a book bag, stating, 'I hate n*****s,'" according to the report.

The DCF report ultimately found that the "final level of risk is low" because Cruz was residing with his mother, receiving in-home mental health services and attending school.

Cruz, who is facing charges of premeditated murder, is willing to plead guilty to avoid the death penalty, according to the public defender's office representing him.

State Attorney Michael J. Satz said Saturday this "certainly is the type of case the death penalty was designed for," but now is the time "to let the families grieve and bury their children and loved ones."

Cruz is being held without bond in Broward County. Appearing in a red jumpsuit with his wrists shackled to his waist, he appeared in court Monday for a hearing on the sealing of certain documents in the case. Cruz didn't speak publicly, answering only his public defender's questions, and looked down for most of the hearing.

Another court had sealed documents pertaining to the defense team's "access to their own client's person," Judge Elizabeth Scherer said, adding that she saw no reason prosecutors would oppose the move. Future such motions will be handled by her court, she said.

As the South Florida community grapples with the aftermath, a 15-year-old teenager was arrested Friday for posting a threat on Instagram to kill people at several Broward County schools.

The Lauderhill teenager appeared to be remorseful and claimed his post was a joke to scare his cousin, according to the Broward Sheriff's office. He now faces one count of sending a written threat to kill, which is a felony.

Since the massacre in Parkland, there have been at least a dozen reports of other incidents involving a threat to a school or a weapon on campus throughout the country. In some of these events, the schools have closed or gone into lockdown.

WILLOUGHBY, OH -- The deadline to register to vote in Ohio's primary is on Tuesday, and there is still plenty of discussion going on in the Willoughby-Eastlake area where the school district is hoping an operating levy passes after failing last year.

53% of voters turned it down, but Superintendent Steve Thompson says he is optimistic about the March vote.

According to the department, the juvenile was last seen on Friday night in Wooster.

This video of J.J. Watt dancing with his grandma is the cutest thing you’ll see today

J.J. Watt proved that his grandma can. The NFL superstar shared an adorable video on Instagram of him and her dancing at his wedding party Saturday night.

This video of J.J. Watt dancing with his grandma is the cutest thing you’ll see today

Bald eagles across the United States are dying from lead poisoning

Some sunshine expected for Presidents Day with temps in the 40s

Quicken Loans founder Gilbert back to work after stroke

No confirmed cases of coronavirus in Ohio; One case remains under investigation

Get paid to binge-watch the ‘Fast & Furious’ saga

‘Beautiful moment’: Mom shares photo of toddler captivated by Target ad with ‘kid like him’