CLEVELAND, Ohio — Voters will get more insight this week into the 17 Republican presidential candidates vying for their party’s nomination as the contenders prepare to square off in the first primary debate.

**For a full list of candidates along with links to their biographies, Q&A’s, personalized video messages to Cleveland and other web extras, scroll to the bottom of this page**

The debate will take place on Aug. 6 at 9 p.m. at Quicken Loans Arena. It will air on the Fox News Channel, with moderators Bret Baier, Megyn Kelly and Chris Wallace.

With the rise of Donald Trump and the drama his surge has provoked, the first debate is arguably the most anticipated 2016 election event to date.

So when’s the debate and who’s going to be on stage with Trump?

The first GOP primary debate will take place Thursday at 9 p.m. EST on Fox News, and it will feature at least the top 10 leading candidates for the GOP nomination.

But political analysts will first watch for a different date and time — Tuesday at 5 p.m.

That’s the cutoff by which national polls must be released to help decide which 10 candidates take the stage on Thursday.

Fox News’ debate criteria, which have spurred some push-back from candidates, rely on the five most recent well-respected national polls of Fox News’ choosing to select the top 10 candidates, as well as weed out the bottom seven candidates, who will lose out on the prime-time airwaves.

Who’s most likely to make the cut?

Recent polls have given a clearer indication of which candidates will most likely be included in the debate, but more polls before the Tuesday cutoff could shift the stage.

Some candidates have their spots all but assured, particularly for the candidates who have consistently placed in the top three in recent polls: Trump, former Florida Gov. Jeb Bush and Wisconsin Gov. Scott Walker, all of whom have pulled double-digit support in the latest polls.

As of now, it appears the two remaining spots could go to any of three candidates: Ohio Gov. John Kasich, who has surged off his late-July announcement, Texas Gov. Rick Perry and New Jersey Gov. Chris Christie.

At the bottom of the pack, registering less than 2 percent of support in recent polls, are Louisiana Gov. Bobby Jindal, former Sen. Rick Santorum of Pennsylvania, former business executive Carly Fiorina and former New York Gov. George Pataki, all of whom have little chance of squeaking into the debate. Former Virginia Gov. Jim Gilmore, who only last week joined the crop of contenders, has failed to register 1% of support in the recent polls in which he was included.

Will the bottom-tier candidates get some national airtime?

Fox News will host a 5 p.m. debate for the bottom candidates, giving them a chance to debate the big issues despite failing to crack into the top ranks of national polling. That debate, given its airtime and the crop of lesser-known candidates, is expected to tout significantly lower viewership.

But voters will get to see nearly all candidates on one stage this week before the Thursday debates.

Fourteen of the 17 contenders will flock to New Hampshire on Monday night for a presidential forum, hosted by the New Hampshire Union Leader and televised by C-SPAN, where voters will get a taste of the candidates’ posture for the big night on Thursday.

Trump, assessing he will not get the New Hampshire newspaper’s endorsement after an editorial critical of his comments about Sen. John McCain’s status as a war hero, told the Union Leader last week he would not participate in the forum.

Huckabee also will not attend, and Gilmore did not announce his candidacy early enough to be included in the presidential forum.

**For a statement from the Democratic National Committee regarding Thursday’s debate, click here**

When you click on each candidate’s name below, you will find their bio and personalized videos and learn how to connect with them on social media: 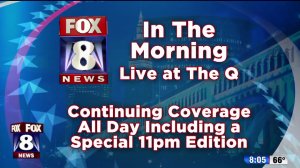 Stay with FOX8 News and FOX8.com for continuing coverage on Thursday’s debate; we will be LIVE with exclusive coverage you will not see anywhere else.

From the candidates, to the moderators, to the experts, we will be the only Cleveland TV station broadcasting LIVE inside Quicken Loans Arena.

It all starts with FOX 8 News in the Morning LIVE from the Q and continues all day including a special 11 p.m. edition of FOX 8 News right after the debate.

*CLICK HERE for much more on the Republican Presidential Debate*

*CLICK HERE for much more on the Republican National Convention*

How to donate to help Hurricane Ian victims

How to donate to help Hurricane Ian victims