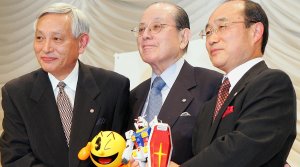 Masaya Nakamura, the “Father of Pac-Man,” who founded the Japanese video game company behind the hit creature-gobbling game, has died at age 91, the AP reports. At the time of his death on Jan. 22, Nakamura held an honorary position at Bandai Namco, formed in a 2005 merger with the pioneering company, then called Namco, he started in 1955.

With humble beginnings in two mechanical horses on the rooftop of a department store, the company went on create video game arcades and amusement parks. The most successful game was Pac-Man, which went on sale in 1980. Guinness World Record has named it the world’s most successful coin-operated arcade game. Designed by video game maker Toru Iwatani, the idea for Pac-Man came from the image of a pizza with a slice carved out. It launched at a time when rival games such as Space Invaders were few.

Pac-Man is estimated to have been played more than 10 billion times. Nakamura reportedly chose the word “Pac” to represent the munching of the Pac-Man devouring its prey. The yellow character is iconic in Japanese culture, having inspired T-shirts and other merchandise, animation shows and the nickname for Filipino boxer Manny Pacquiao.

Nakamura was a key player in the global growth of Bandai Namco. The company announced Nakamura’s death on Monday, but would not comment on the cause of his death or other personal details, citing his family’s wishes.

Olympic Champ: Queen Made Me a Knight, Trump Made Me an Alien
Father Finds 6 Teens Dead in Garden Shed
US Suffers 1st Combat Death of the Trump Era

CLEVELAND (WJW) – An arrest warrant was issued Wednesday in connection with the murder of Frank Q. Jackson, the grandson of Cleveland Mayor Frank Jackson.

The FOX 8 I-Team obtained a copy of the warrant filed in Cleveland Municipal Court. It says the suspect “directed” Frank Q. Jackson to the location where he was shot and killed.

Plasticizer found in food from McDonald's, Domino's, others

The chemicals were also found in gloves used to handle the food, which the study authors hypothesized might be the source of the contamination.

(WKBN) - Ohio is only one of two states where consumer fireworks are illegal, but Wednesday in Columbus, both the Ohio House and Senate overwhelmingly voted to change that.

‘It just melts my heart’: Crew gives back to local veteran by replacing leaky roof

Trailer out for ‘Tiger King 2’

Netflix codes to find the best movies for Halloween