BRITISH COLUMBIA  – A community is trying to find answers after a family was found dead, and the father appeared to admit to the murders on Facebook.

According to CBC, Randy Janzen posted about killing his daughter Emily, 19, hiw wife, Laurel and his sister Shelly.

The post details that he killed his daughter because of migraines and depression. It then states he killed his wife because “a mother should never have [to] hear the news her baby has died.”

Investigators confirmed Friday that several bodies were found and at two separate homes, but the identities were not confirmed.

CBC cannot confirm that Janzen wrote the post below and he hasn’t responded to their attempts to contact him. 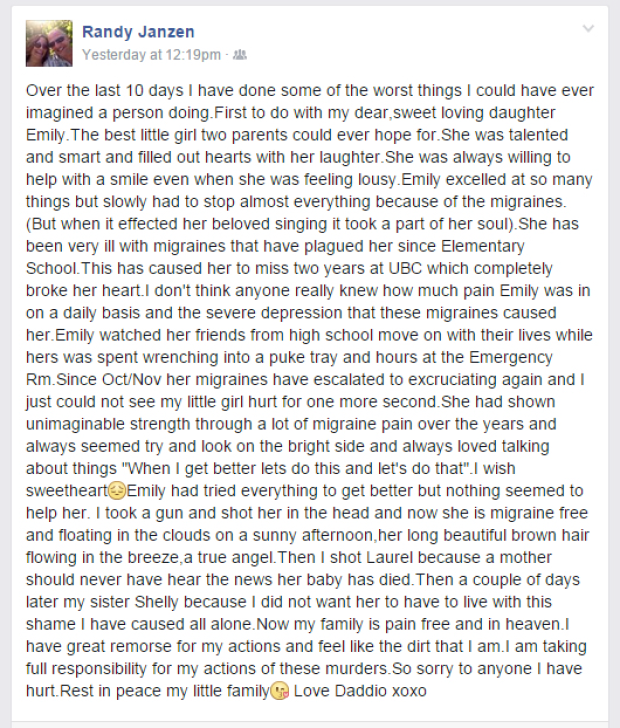 "With a thoughtful process for releasing booking photos, law enforcement agencies may help mitigate or avoid perpetuating negative stereotypes which can contribute to implicit and explicit bias in policing and by community members," Scott announced in a notice to the department.

CLEVELAND (WJW) -- Ohio Governor Mike DeWine Thursday unveiled a new county-by-county alert system for coronavirus risk in the state, but he stopped short of announcing any new restrictions or closures amid a surge in the virus.

I-TEAM: What police choppers saw during the riots in downtown Cleveland

CLEVELAND (WJW) -- Cleveland Division of Police released never-before-seen video to the FOX 8 I-TEAM, and it shows what their choppers recorded during hours of rioting and looting.

The video reveals how the eyes in the sky saw what officers on the ground couldn’t always see.

I-TEAM: What police choppers saw during the riots in downtown Cleveland

Ohio launches color-coded system for coronavirus risk in each county

Fireworks believed to be factor in fire at Jackson Township home