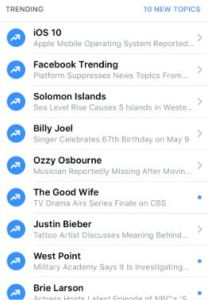 Former Facebook “news curators” reportedly told Gizmodo that they were told to artificially “inject” certain stories into trending news, even if they weren’t popular enough.

One person reportedly said workers prevented stories about the CPAC gathering, Mitt Romney and Rand Paul- to name a few- from appearing in the trending section, even though they were trending.

On Monday, Facebook released the following statement about the accusations:

“We take allegations of bias very seriously. Facebook is a platform for people and perspectives from across the political spectrum. Trending Topics shows you the popular topics and hashtags that are being talked about on Facebook. There are rigorous guidelines in place for the review team to ensure consistency and neutrality. These guidelines do not permit the suppression of political perspectives. Nor do they permit the prioritization of one viewpoint over another or one news outlet over another. These guidelines do not prohibit any news outlet from appearing in Trending Topics.”

WASHINGTON (AP) — Joe Biden formally clinched the Democratic presidential nomination Friday, setting him up for a bruising challenge to President Donald Trump that will play out against the unprecedented backdrop of a pandemic, economic collapse and civil unrest.

The former vice president has effectively been his party's leader since his last challenger in the Democratic primary, Bernie Sanders, ended his campaign in April. But Biden pulled together the 1,991 delegates needed to become the nominee after seven states and the District of Columbia held presidential primaries Tuesday.

WEST CHESTER, Ohio (WCMH) — Plants bloom in stages throughout the state of Ohio. Right now there is a warning coming from Hamilton and Butler Counties in the Southwestern part of the state about dangerous blooming weeds.

Wild parsnip and poison hemlock are beginning to show their colors in that region, and that means Franklin and surrounding counties in Central Ohio should see these invasive weeds blooming in the next couple of weeks.

(WBTW) -- NFL Commissioner Roger Goodell issued a statement Friday condemning racism and admitting that the league was wrong in how it has handled players' protests of police brutality.

In the video, NFL Commissioner Roger Goodell offered his condolences to the families of George Floyd, Breonna Taylor, Ahmaud Arbery, and all families who have endured police brutality.

Pleasant weekend weather expected with temps in the 70s