PARMA, Ohio-- An old football jersey and helmet were among the items in a growing memorial for 16-year-old Sergey Pivovarnik in Veterans Memorial Park, next to the lake where he drowned.

One-hundred people formed a prayer circle Monday evening, some of them sharing their favorite memories of the Parma City School District junior, a standout in the classroom and on the football field.

"He was a nice, sweet, kind kid," friend and football teammate Jeff Judson said. "Everyone liked him."

Lt. Bryan Downie, of the Parma Fire Department, said Pivovarnik and 2 or 3 of his football teammates jumped into the lake, commonly referred to as State Road Lake, after football practice around 11 a.m. Monday. 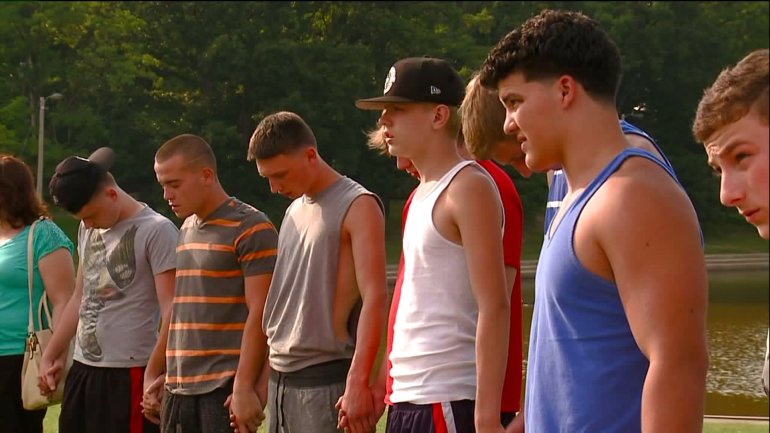 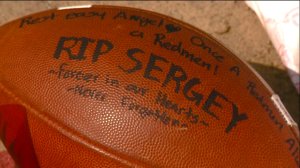 Downie said Pivovarnik reportedly began struggling near the middle of the lake, where depths are as much as 12 feet, then went under before his teammates could help him.

Teammates told Fox 8 News the team had been running a hill next to the lake. There are several 'no swimming' signs posted. Searchers scoured the waters before finding Pivovarnik's body around 1 p.m.

"To see what's going on, divers looking for him, I almost fainted," said Nick Pivovarnik, Sergey's older brother. "It was almost breathtaking. I still can't believe this right now."

He said he was at work and rushed to the scene after getting a text message that his brother had disappeared.

"He didn't know how to swim, plus when he played football he had surgery on his leg. I don't know. His friends dared him to swim halfway across the lake," Nick Pivovarnik said. "It feels like all day has been a dream."

Some Parma residents questioned whether the drowning would've been prevented had the city's three pools been opened. City Council voted to close the pools as part of its budget this year.

Sergey dreamed of becoming a doctor, his brother said. He was set to enroll in the medical program at Normandy in the upcoming school year, according to the Parma City School District. In an online post, the district said he was also a "peer mentor, student worker, and all around great kid."

"He would've been something great in life, and I'm so devastated it ended like this," Nick Pivovarnik said.

The City of Parma released a statement expressing condolences after a "heartbreaking and tragic" day in the city.

"Just real sad a good friend had to go," said friend and teammate Dorian Hampton. "He was a great, amazing person and he will truly be missed."

Grief counselors will be at Parma Senior High School Tuesday from 9 a.m. to 12 p.m.

Astronomer: Flash seen in sky over 15 states was large meteor that fell somewhere in area south of Youngstown

CLEVELAND, Ohio (WJW) -- A local astronomer says a flash that lit up the sky above Northeast Ohio early Wednesday morning was a large meteor seen in at least 15 states.

The store was damaged in the May riots, and the company has also been making adjustments due to the coronavirus outbreak in March.

Astronomer: Flash seen in sky over 15 states was large meteor that fell somewhere in area south of Youngstown

Halloween 2020: A list of Northeast Ohio trick or treat times

Honoring those who are battling, passed away from or survived breast cancer