DETROIT — Legendary singer Aretha Franklin is said to be “gravely ill” in a Detroit hospital.

According to Showbiz 411, the Queen of Soul is surrounded by friends and family.

Showbiz 411 reported the family is asking for prayers and privacy.

Franklin, 76, who has battled a number of health problems in recent years, last performed in November of 2017 at a fundraiser for the Elton John AIDS Foundation in New York.

Harry Hairston, an investigative reporter at the NBC station in Philadelphia, tweeted that he spoke with a close friend of Aretha Franklin. “Iconic singer not doing well,” he tweeted.

Franklin became the first woman in the Rock & Roll Hall of Fame when she was inducted back in 1987.

Her song “Respect” is generally regarded as her biggest triumph. 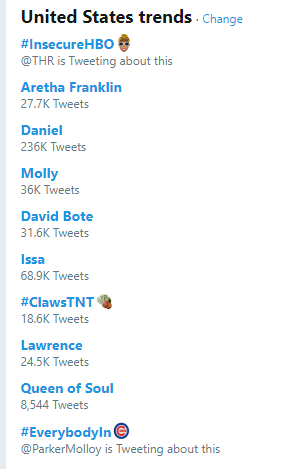 “Aretha Franklin” and “Queen of Soul” were trending on Twitter late Sunday and early Monday.

Franklin received an honorary doctorate from Case Western Reserve University back in November of 2011.

CLEVELAND (WJW) — Cleveland native Drew Carey continues to advocate for his hometown, even from afar.

"The Price is Right" host recently appeared on "Celebrity Wheel of Fortune," winning $55,550 for a local charity, the Greater Cleveland Food Bank.

LOS ANGELES (AP) — Dr. Dre was back at home Saturday after being treated at a Los Angeles hospital for a reported brain aneurysm.

Peter Paterno, an attorney for the music mogul, said Dre was home but offered no other details in an email exchange Saturday. The rapper and producer reportedly was released Friday from Cedars-Sinai Medical Center.

MEMPHIS, Tenn. (AP) — Elvis Presley's Graceland is now offering live online tours for fans around the world, including those who can't travel to the Tennessee tourist attraction during the coronavirus pandemic.

Graceland said the two-hour guided tours will take virtual visitors into Presley's former Memphis home, which has been turned into a museum, and through the Meditation Garden, where he is buried. The singer and actor died in Memphis on Aug. 16, 1977.