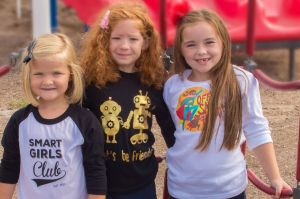 If you have a daughter who hates dresses and abhors anything pink, sparkly or with ruffles and frills, you are pretty much out of luck if you head to most of the major retail stores. What you end up doing is shopping in the boys’ section for your daughter’s clothing.

There’s nothing wrong with that, but shouldn’t there be more options for girls?

The answer, according to 10 “mompreneurs” who have banded together, is an emphatic yes. Through their #ClothesWithoutLimits campaign, these mothers from around the country, many starting their businesses through Kickstarter, are hoping to raise awareness about the current limitations when it comes to clothing for girls and how clothing that bashes gender stereotypes can have an impact far beyond the outfits themselves.

“Clothes are such an expression of who we are and … how we choose to go out into the world is so important,” said Michele Yulo, one of the members of #ClothesWithoutLimits, who was inspired by her daughter, Gabi, now 10, to create Princess Free Zone back in 2009. Her company offers empowering T-shirts for girls emblazoned with images such as dinosaurs, hammers and soccer balls.

“I just believe that the more options (girls) have and they can see … the less limitations they will perceive that they have.”

Yulo has now gone a step further. When Gabi, who loves baseball, basketball and playing the violin, needs to dress up for a family occasion, her mom’s had to buy suits or tuxedos that are made for boys. Dresses are not an option, said Yulo, and try finding a suit for girls at any major retailer. “Impossible,” she says.

Determined to change that, Yulo recently launched a Kickstarter campaign for Suit Her, with the hope of raising $90,000 to begin offering three different lines of suits for girls 5 to 12. (I can barely contain my excitement that my daughter, who dreads wearing dresses, can buy a suit for her cousin’s upcoming bat mitzvah.)

Yulo believes options such as suits that are made for and fit girls send a clear message to the girls buying them and the rest of us as well.

“Kids shouldn’t have to be brave to wear the things they like,” she said. “This goes back to … why is retail so important because that is how people are looking at you. That’s how they’re sizing you up. That is where the labels come from.”

‘Girl clothes without the girly’

Like Yulo, Sharon Choksi has a daughter who couldn’t find anything to wear in the girls’ sections of stores and for years would buy everything she needed from the boys’ department.

“When she was younger, we’d hear kids whisper innocently to their parents, ‘Is that a boy or a girl?,’ kids at school saying, ‘Why are you wearing boys’ clothes all the time?’ ” she said.

Her daughter wasn’t really bothered by it, but Choksi, another member of #ClothesWithoutLimits, thought of all the other girls and their parents who eventually would get tired of the comments, lose interest in dinosaurs and spaceships, and wear more gender-accepted clothing.

So she and two of her siblings (Laura and David Burns) started Girls Will Be, which offers a range of T-shirts and shorts for active girls with images ranging from dinosaurs to spaceships to math equations. It’s tagline is “Girl clothes without the girly.” (Full disclosure: My older daughter will only wear shirts from Girls Will Be.)

“Over and over, the message every season in every store is so consistent that children start to internalize that and say, ‘Oh, OK, the rough and tumble sports or the wildlife and creatures or the outer space, that’s always over there in the boys’ section, and the sparkly penguins and kittens and rainbows are in the girls’ section,” said Choksi, a mom of two.

“It’s on top of the other messages that they see in toys, that they see in the media and movies and books … and so by the time kids are 4 and 5, they’re assimilating all this information and coming up with very strong opinions, specifically on the math and the science side,” she said. “To be sending messages to one gender that that’s really not for them is doing those kids a disservice.”

For girls who love dresses and dinosaurs

Rebecca Melsky’s story is markedly different from Choksi’s and Yulo’s. Her daughter, now 5, loves wearing dresses, but Melsky, also a member of the #ClothesWithoutLimits team, wondered why she could never find one with a dinosaur or a spaceship on it.

So, back in April 2013, she and a friend, Eva St. Clair, started Princess Awesome, which offers dresses with motifs traditionally found on boys’ clothing. At first, they started doing everything by hand, but based on the overwhelming response, earlier this year, they launched a Kickstarter campaign to move operations from their home and into factory production.

In all, they raised $215,000, blowing away the Kickstarter campaigns for previous children’s wear.

“So many people have daughters or granddaughters or nieces or friends who are interested in our clothes for so many reasons,” said Melsky. Some girls who don’t like to wear dresses say these dresses speak to them. Other girls who like them are the ones who have been wondering why all the dinosaur clothes are on the boys’ side, she said.

“Parents too … want to encourage a love of math and science in their daughters and adventure and pirates and other things besides what is available,” she said. “It’s just wanting to show them all the options they can be.”

The message that clothes send makes a difference, said Melsky.

“Kids, boys and girls, are sent a message when they walk through clothing stores or when they see what other kids are wearing and we think that … by all of us doing our part, we can change that message and give kids more options.”

The mothers behind #ClothesWithoutLimits say there are signs major retailers are slowly getting the message, with all the women I talked to pointing to Target’s recent decision to move away from gender-based signage in some departments.

But still, there is a long way to go before girls and boys can find clothing that doesn’t cater to gender stereotypes in most stores, they conceded.

“Their pink and sparkly for girls has sold well and does well and there are a lot of kids who like that style and it works for them, and that’s fantastic, and it is always hard, I think, to be the first one to step out and say, ‘Nope, times are changing and we are going to offer kids something different’ for fear that it won’t sell,’ ” said Choksi of Girls Will Be.

These women aren’t doing this for the money, Yulo of the Suit Her line said. In fact, Yulo said she hasn’t made a cent from her first endeavor, Princess Free Zone, and even had to sell her wedding ring to start the business six years ago.

“I don’t think anybody’s making a fortune off of this. I think that we’re all authentically in it,” she said.

They are driven by a passion to make life better for girls and boys, and a belief that their small companies can do more by working together than by competing.

“We all believe that the message that clothes send to kids matters and that we’re all doing something about it and our voices could be louder together than they are just on their own,” said Melsky of Princess Awesome.

CLEVELAND (WJW) -- The Cleveland Division of Police is asking for the public's help finding a driver involved in a fatal hit-skip on July 1.

According to the department, it happened around 2:25 a.m. at Corlett Avenue and East 130th Street.

LOS ANGELES  (CNN) -- One of the world's most famous COVID-19 survivors has reportedly made his feelings known about those who don't wear masks.

Actor Tom Hanks and his wife, actress/singer Rita Wilson, were two of the first celebrities to announce they had contracted the virus and, according to People, Hanks is now urging people to mask up.