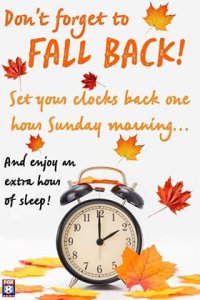 Daylight Saving Time ends this Sunday at 2 a.m.; so before you go to bed Saturday night, you’ll want to turn your clocks back an hour.

The system is meant to reduce electricity usage by extending daylight hours.

It means you’ll get an extra hour of sleep. Then, the earliest sunsets of the year will happen in early December where the sun will set just before 5 p.m.

This weekend is also a good time to change the batteries on your smoke detectors and carbon monoxide detectors.

Here are a couple of facts about the yearly occurence:

Timeline:
1784 – The idea of daylight saving is first conceived by Benjamin Franklin.

March 19, 1918 – The Standard Time Act establishes time zones and daylight saving. Daylight saving is repealed in 1919, but continues to be recognized in certain areas of the United States.

1966 – The Uniform Time Act of 1966 establishes the system of uniform Daylight Saving Time throughout the United States. The dates are the last Sunday in April to the last Sunday in October. States can exempt themselves from participation.

1974-1975 – Congress extends DLS in order to save energy during the energy crisis.

1986-2006 – Daylight Saving Time begins on the first Sunday in April and ends on the last Sunday in October.

August 8, 2005 – President George W. Bush signs the Energy Policy Act of 2005 into law. Part of the act will extend Daylight Saving Time starting in 2007, from the second Sunday in March to the first Sunday in November.

2007 – Under the new laws, all of Indiana now observes Daylight Saving Time, where only certain areas of the state did before.

The US territories of Guam, Puerto Rico, Virgin Islands and American Samoa also do not observe DLS.

What countries follow Daylight Saving Time?
About 70 countries around the world observe DLS.

Many countries near the equator do not adjust their clocks for daylight saving.

Neither China nor Japan observe DLS.

Some countries refer to “Daylight Saving Time” as “Summer Time.”

WASHINGTON (NEXSTAR) — Representatives from around the Midwest made a mad dash to Washington to pass a massive $2.2 trillion stimulus package for Americans slammed by closures to slow the spread of coronavirus.

“There were two members of Congress on the plan out of the total of four passengers,” Rep. Rodney Davis, R-Ill., described his flight in.

Police have a person in custody who is being interviewed by detectives, the official said. The cause of the fire is still under investigation, but the officials said it "appears intentional" to investigators who found a charred shopping cart filled with burnt clothing and other items inside the subway car where they believe the fire started. An exact cause of the fire will be up to FDNY fire marshals to determine.

For Jacklyn Shea, a West Michigan mom who just delivered her second baby, it was a last-minute decision. She switched to a home birth plan just days before her due date.

Share your pics! Americans put holiday displays back up to deal with virus outbreak

‘They don’t need to be out’: Brad Paisley’s free grocery store delivering to the elderly in light of outbreak