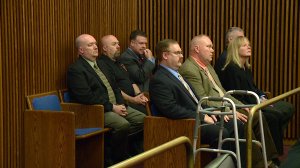 Common Pleas Judge Judge O'Donnell issued his ruling on Friday, saying "regardless of the outcome of the motion to dismiss, the defendants will be subjected to trial."

The five supervisors were set to go to trial in Cuyahoga County on Monday, but this decision makes way for a new trial in East Cleveland.

Fox 8 has reached out to the officers' attorneys, the prosecutor's office and the Cleveland Police Patrolman's Union for comments on the ruling.

Attorney Mark A. Stanton, from the law firm Short, Shepherd & Stanton, who is representing Paul Wilson released the following statement, "While my client and I respect Judge John O'Donnell, we respectively disagree with the ruling. I am going to strongly encourage my client to appeal that ruling."

Jason Edens' attorney, David L. Grant, of Grant & O'Malley Co., L.P.A., told FOX 8, "We are disappointed. We believe the state has to show 'just cause' to dismiss the case and we don't believe they did that. We expect to file an appeal."

In May,  Judge O'Donnell found Cleveland Police Officer Michael Brelo not guilty on two counts of voluntary manslaughter related to the chase.

(NEXSTAR) – Domino's pizza is giving away roughly 10 million slices of pizza to help feed those most affected by the coronavirus pandemic.

Company- and franchise-owned restaurants across the country will start donating slices to people in their communities starting this week, according to a Domino's news release. Every Domino's store will have 200 pizzas to distribute.

That's according to Today, who exchanged emails with his parents.

Hoarding not the only reason for toilet paper shortage

‘I felt like death had knocked on my door’: 35-year-old man talks about surviving coronavirus