PIKE COUNTY, Ohio — A family of four arrested Tuesday in the gruesome slayings of eight people from another family in rural Ohio two years ago carefully planned the killings for months in a crime prosecutors vaguely explained as a custody dispute, authorities said.

Ohio Attorney General Mike DeWine said a grand jury indicted the four on aggravated murder charges and that could be sentenced to death if convicted.

DeWine gave scant detail about why they were killed, but did say the custody of a young child played a role.

Arrested were four members of the Wagner family, who lived near the scenes of the killing about 60 miles south of Columbus.

One of those arrested was Edward “Jake” Wagner, 26, who was a long-time former boyfriend of 19-year-old Hanna Rhoden, one of the eight victims, and shared custody of their daughter at the time of the massacre. 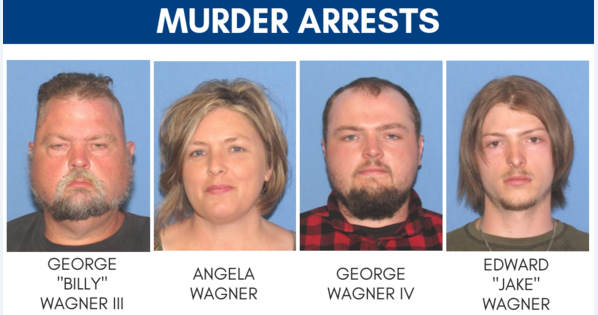 The Wagners had moved to Alaska, but authorities said three were arrested in Ohio.

Police in Kentucky say the FBI tracked “Billy” Wagner to Lexington, where he was arrested without incident at around 12:30 p.m. Tuesday. Lexington police weren’t sure if he had been living in the area.

Authorities said Wagner was arrested in a horse trailer that was pulled over.

The mothers of Angela Wagner and “Billy” Wagner also were arrested in Ohio and charged with misleading investigators.

It’s the culmination of a massive investigative effort since seven adults and a teenage boy were found shot in the head at four homes in April 2016.

Investigators scrambling to determine who targeted the Rhoden family and why had conducted over 130 interviews and processed over 100 pieces of evidence and 550 tips, while getting assistance from more than 20 law enforcement agencies.

Dewine said the case involved an “obsession with the custody and control of children” and called it one of the most bizarre situations he has seen.

He also said the Wagner family knew the victims well and spent months studying their routines and the layouts of their homes. “They had thought about it, a lot” he said.

Authorities in June of 2017 announced they were seeking information about the Wagners, including details on personal or business interactions and conversations that people may have had with the four.

None was named a suspect at the time. Investigators also said they had searched property in southern Ohio sold by the Wagners.

Both Jake Wagner and Angela Wagner told the Cincinnati Enquirer they were not involved in the April 2016 killings.

Angela Wagner said in an email to the newspaper that what happened was devastating and Hanna Rhoden was like a daughter to her.

Wagner also told The Enquirer that her husband, Billy, and Christopher Rhoden Sr. were more like brothers than friends.

John Clark, a lawyer who has been representing the Wagners, said a year ago that four of the Wagner family members had provided laptops, phones and DNA samples to investigators, and agreed to be interviewed about the slayings.

Clark said Tuesday the family will be vindicated.

“We look forward to the day when the true culprits will be discovered and brought to justice for this terrible tragedy,” Clark said in a statement. He added: “The Wagners are also very hopeful that in the ensuing months there will be a thorough vetting of all the facts.”

The Wagner family has lived in Peebles, Ohio, at the time of the killings but later moved to Alaska.

Clark told The Cincinnati Enquirer that the family was being “harassed while the real killer or killers are out there.”

A coroner said all but one of the victims was shot more than once, including two people shot five times and one shot nine times. Some also had bruising, consistent with the first 911 caller’s description of two victims appearing to have been beaten. The coroner’s report didn’t specify which victims had which wounds.

Authorities said marijuana growing operations were found at three of the four crime scenes. That’s not uncommon in this corner of Appalachia but stoked rumors that the slayings were related to drugs, one of many theories on possible motives that percolated in public locally.

It appeared some of them were killed as they slept, including Hanna Rhoden, who was in bed with her newborn nearby, authorities said. The child, Hannah Gilley’s 6-month-old baby and another small child weren’t hurt.

Three funerals were held for the victims.

TOLEDO, Ohio (AP) — Fraternity members in Ohio who organized an alleged hazing ritual that led to the alcohol poisoning death of a 20-year-old pledge in March were well aware of how dangerous it could be, said an investigation released Friday.

Before the party, organizers set out trash cans for vomiting, told the pledges to let professors know they likely would not be in class the next day and arranged for designated drivers and members to watch over them when they became intoxicated, the report said.

COLUMBUS, Ohio (WJW) — Ohio Governor Mike DeWine announced Friday that Ohio is revising its coronavirus health orders, including rules about masks, to be in compliance with new guidelines from the Centers for Disease Control and Prevention.

CUYAHOGA COUNTY, Ohio (WJW) -- The suspect accused of shooting and killing a 73-year-old Vietnam veteran in a Maple Heights laundromat in 2019 pleaded guilty in court Thursday.

CDC relaxes mask guidelines — but these stores will continue to require them for customers, employees

Ohio attorney general proposes $1,000 for each police officer who served during pandemic

Ohio vaccine lottery: Who is eligible for the weekly $1 million, scholarship prizes — and what do they need to do?

‘We need to get people off the bridge as soon as possible’: Hear Tenn. bridge crews frantic 911 calls after crack found