The move comes as Democrats position to win back control of the key battleground state in November. The new team is expected to draw big-name Democratic support that could include former President Barack Obama, former Vice President Joe Biden and Massachusetts U.S. Sen. Elizabeth Warren.

The decision by Cordray’s gubernatorial campaign to go with Sutton as his running mate follows a similar move by two key Republicans: Attorney General Mike DeWine and Secretary of State Jon Husted consolidated their campaigns on Nov. 30, to unite campaign and grassroots resources and to minimize negative attacks that could hurt their party in the general election. 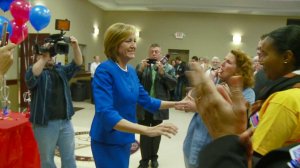 O’Neill announced his running mate, educator Chantelle E. Lewis, of East Cleveland, on Tuesday, adding age and race diversity that O’Neill said will distinguish him with Democratic voters. O’Neill, who’s 70 years old, is white, as are the other gubernatorial candidates; Lewis, who’s 42, is black.

A Kucinich spokesman said Tuesday the former congressman will provide more details on whether he plans to make a run “over the next several days.” He is said to be considering Nina Turner, a fiery former state senator who was a leading national mouthpiece for Vermont U.S. Sen. Bernie Sanders’ Democratic presidential bid, as a running mate.

Cordray served until November as head of the Consumer Financial Protection Bureau, one of the last major Obama-era holdouts in President Donald Trump’s administration. He is the only Democrat in the race who has run an Ohio statewide office, having been state treasurer and state attorney general.

Cordray hired Democratic fundraiser Antonia Koch after she helped Democrat Doug Jones raise $10 million in the final months of his Alabama campaign for U.S. Senate. Jones beat Republican Roy Moore, a former judge who was accused of sexual misconduct with teenage girls decades ago, when he was a county prosecutor in his 30s, in the high-profile contest. Moore, who was backed by Trump, largely denied the misconduct accusations.

Sutton, who’s from Copley, brings strong labor support and a pro-consumer record to the Cordray team.

In Congress, she sponsored the law that created Cash for Clunkers, a program that provided financial incentives to car owners to trade in old vehicles for more fuel-efficient models. More than 60,000 jobs were saved or created in the second half of 2009 under the program, according to federal figures.

Sutton’s decision to put her own gubernatorial hopes behind Cordray’s is sure to face pushback from some women. An active contingent of Democrats had been working to make 2018, a year that follows Hillary Clinton’s presidential race defeat and a national anti-sexual harassment wave, the first year Ohio elects a female governor.

The new counties at the red level are Clermont, Fairfield, Lorain, Pickaway, Summit and Wood. Already on the list were Butler, Cuyahoga, Franklin Hamilton, Montgomery and Trumbull counties.

COLUMBUS, Ohio (WJW) -- The state of Ohio has released guidelines for higher education institutions to utilize when reopening their campuses for the upcoming fall semester amid the coronavirus pandemic.

According to Governor Mike DeWine, the Ohio Department of Higher Education worked with Ohio's colleges and universities, as well as the state health department, to develop these guidelines.

**Watch a one-on-one interview with President Trump in the video, above, where he addresses stimulus checks**

WASHINGTON (NEXSTAR) -- Recent messaging from White House advisors and top Republican lawmakers has centered around a second round of stimulus relief being targeted for those most impacted by the financial situation created by the COVID-19 pandemic. Could that means millions of Americans who received a check earlier this year being left out of round two?

A closer look: Mask mandate for Ohio counties with high risk of coronavirus

Woman throws boxes of shoes at store worker after being asked to wear face mask, then leaves wallet behind

Beat the heat: A list of places to cool off at Lake Metroparks